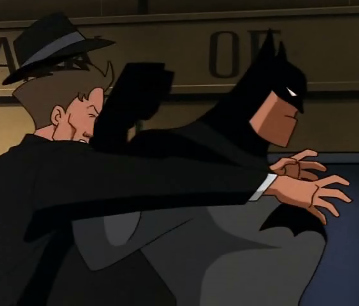 Being an Evil Minion is a hard (and short) life. If you're not constantly getting killed, you're getting knocked the fugg out by the Hero.

Some Mooks, instead of following the rules of Mook Chivalry, try getting smart, sneaking up on the hero when he's busy fighting another fellow Mook, or while in conversation with the Girl of the Week, and striking him from behind.

Sounds easy, right? He's not even looking your way, throwing punches or running his mouth. All you have to is be silent... just a little closer...

Nope, not only do you still get knocked out (or shot down), the Hero doesn't even give you the courtesy of looking your way first. And of course, you just made him look that much cooler.

Compare Foe-Tossing Charge, only even more humiliating for the poor sap on the receiving end. Most users of this move have a Badass Back. There is a certain amount of Truth in Television to this: The reverse kick is a fairly viable move.

Examples of Offhand Backhand include:

Retrieved from "https://allthetropes.org/w/index.php?title=Offhand_Backhand&oldid=1782856"
Categories:
Cookies help us deliver our services. By using our services, you agree to our use of cookies.