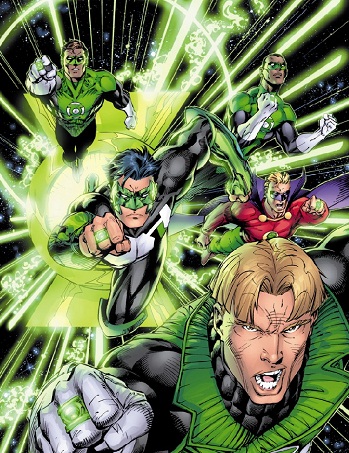 Outer space isn't as dark as you think.

Green Lantern is a classic DC Comics Superhero and one of the first to embrace the concept of a Legacy Character. Compared to other heroes, Green Lantern has the unique ability to create objects out of solid green light, whose forms are limited only by the character's imagination. In addition, he can fire energy blasts, fly in deep space, generate force fields, and translate (almost) any alien language. All this is provided by a quasi-technological Power Ring, that must be recharged every 24 hours with a lantern-esque Power Battery. Oh, and it can't work on the color yellow (usually).

Created in 1940, the original Green Lantern was a railroad engineer named Alan Scott, who fashioned his ring and lantern out of a magic metal called the Starheart. However, in the late 1950s DC Comics revamped the title with a sci-fi bent, re-imagining the hero as cocky test pilot turned space cop Hal Jordan, who was given a Power Ring by a dying alien who crash landed on Earth (and was just one of many extraterrestrial peacekeepers serving the wise Guardians of the Universe). What most people know of the character originated during this era: the villainous Lantern renegade Sinestro, the living planet Mogo, alien drill instructor Kilowog, and aerospace entrepreneur/love interest Carol Ferris. Occasionally, Jordan would pass his ring off to other humans, like stoic architect and former U.S. Marine John Stewart or lovable jerk Guy Gardner. Alan Scott would also return, first as an Earth-2 counterpart to Hal, then after continuities got merged in the Crisis on Infinite Earths he became a respected elder hero with only the loosest connection to the Corps.

Over the years, the Green Lantern title would gain infamy for being taken in a few controversial directions:

The franchise is currently helmed by Geoff Johns, who spearheaded Jordan's return and developed the emotional spectrum. It currently consists of:

The Green Lanterns are also frequent members of versions of the Justice League of America, with Hal, John, and Kyle part of different incarnations of the main team and Guy Gardner in Justice League International. Alan Scott is also a founding member of the Justice Society of America, which is either the League's predecessor or its Earth-2 counterpart depending on the era.

Outside of comics, Green Lantern has been animated a number of times for television, including Superfriends, the DCAU (mostly in Justice League), Batman the Brave And The Bold, the DTV releases Green Lantern First Flight and Green Lantern Emerald Knights, and even a notable episode of Duck Dodgers. Warner Bros. released the first big budget Green Lantern movie in 2011, starring Ryan Reynolds as Hal Jordan; and is following up with Green Lantern: The Animated Series.

With a Corps of over 7,000 alien enforcers, you better believe there's a Character Sheet. And if you're still confused about why there's so many Lanterns or how willpower tastes like green, feel free to read the Synopsis.

Green Lantern is the Trope Namer for:
The following tropes are common to many or all entries in the Green Lantern franchise.
For tropes specific to individual installments, visit their respective work pages.
Retrieved from "https://allthetropes.org/w/index.php?title=Green_Lantern&oldid=1929031"
Categories:
Cookies help us deliver our services. By using our services, you agree to our use of cookies.