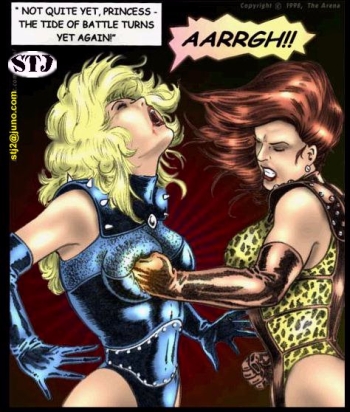 Breast Attack is the Distaff Counterpart to Groin Attack, since receiving blunt trauma to the breasts is painful for women, though probably not as painful as Groin Attack is for men (not that many people can be a proper judge of that). The nipples are also rather sensitive, though this is also true for men to a lesser extent.

In reality, a Groin Attack is much more dangerous and painful for women than a Breast Attack, not even so much because of genitalia but more because of being a site of most major vital nerves and blood-vessels to the lower extremities. However, in a fight, breasts are a much easier target, which is why the Breast Attack is much more common than a female Groin Attack.

A Breast Attack is sometimes intended to show that the male attacker is playing dirty (and against a woman too, how low!). You're supposed to wince at this one, but this trope is occasionally Played for Laughs. If the victim is already a Butt Monkey, it's okay to laugh. Or if it's a woman doing it to another woman. Or a man getting a purple nurple.

Examples of Breast Attack include:

Retrieved from "https://allthetropes.org/w/index.php?title=Breast_Attack&oldid=1882388"
Categories:
Cookies help us deliver our services. By using our services, you agree to our use of cookies.