How the Grinch Stole Christmas! (animation) 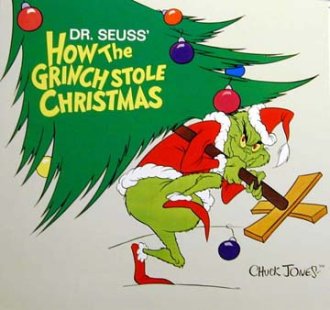 You're a bad banana with a... greasy black peel!

You're a mean one, Mr. Grinch!
You really are a heel!
You're as cuddly as a cactus!
You're as charming as an eel!
Mr. Griii-inch!

An animated special based upon the book of the same name. It was animated by Chuck Jones, with Boris Karloff providing the voice of both the eponymous grinch and the narrator. The special follows the plot of the original book closely. It was originally broadcast on CBS in December 18, 1966, and since then has been regarded as one of the classic TV Christmas Specials.

Followed by Halloween Is Grinch Night.

Tropes used in How the Grinch Stole Christmas! (animation) include:

You're a rotter, Mr. Grinch...
You're the king of sinful sots.
Your heart's a dead tomato splot with moldy purple spots,
Mr. Gri-INCH!