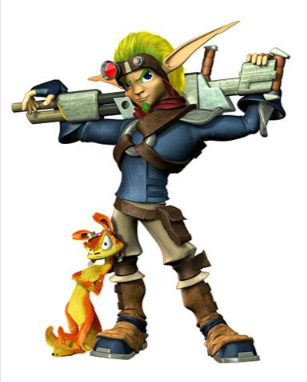 Odder than even an Odd Couple, one of these guys isn't human! They might be an ordinary animal who's just a bit smarter than average, some form of Talking Animal, a Robot Buddy, a space alien, or even stranger, a normally inanimate object gifted with sentience or even locomotion (and sometimes not even that). Particularly useful when it comes to going for help, stealing keys when the Big Bad has you locked up, or throwing the OFF switch on the Conveyor Belt O' Doom once he leaves the room.

In webcomics it often takes the form of the Snarky Non-Human Sidekick. May be a Bond Creature.

This primarily applies if the sidekick is distinctly different from its buddy. Pinky from Pinky and The Brain is decidedly nonhuman, and the Brain's sidekick, but since the Brain is a mouse himself there's no real difference.

Compare and contrast with Amusing Alien and Token Non-Human.

Examples of Non-Human Sidekick include:

Retrieved from "https://allthetropes.org/w/index.php?title=Non-Human_Sidekick&oldid=1871633"
Categories:
Cookies help us deliver our services. By using our services, you agree to our use of cookies.