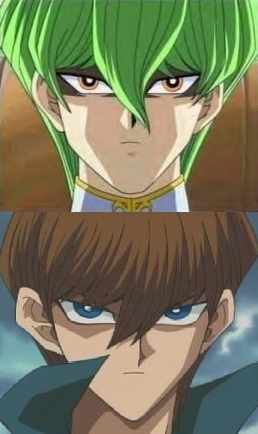 Screw the rules, he used to have green hair!

So you've just watched The Movie of your favorite series. And it was good. There was one detail, however, that they missed. The main character's hair, blond in the original, was brown, and the wacky sidekick's hair was a darker shade of yellow than usual. And why was the villain's jacket orange?

At least that's the most common version of this trope. For some reason as a work moves from one medium to another characters' hair colors will be changed, costumes will be toned down, color schemes will be swapped about or adjusted. While occasionally there may be a justification for this (as may be the case for works which were originally in Black and White or monochromatic), more often than not it is just a random change made as a work is adapted. One particularly common adaption dye job for costumes is that more often than not, in a movie adaption, everyone now wears black. (This is mainly due to Rule of Cool and the actors wanting to look slimmer.)

It is unclear why matters of color are one of the things executives target first, but it can cause problems down the line if any of the original color choices had symbolic meaning.

This is usually excused in the case of Legacy Characters. Usually. It's also generally justified when casting for a live-action version of a work, as most casting directors favor, you know... acting ability over resemblance to the original character. And as shown in the examples, live-action also has different aesthetic considerations to animation, meaning different choices must be made for things to look good. But some fans bring it up regardless.

Related to Spell My Name with an "S". Can be related to Race Lift, if the skin color changed with the hair. Though the visual effect can be similar, this is not related to Palette Swap. For when the character is changed so much as to be an entirely different character, that's In Name Only, and this can end up as a Sub-Trope.

Dyeing for Your Art can Avert this, though it won't always. See also Hair Color Dissonance, Suddenly Blonde.

Examples (sorted by the original media)

Retrieved from "https://allthetropes.org/w/index.php?title=Adaptation_Dye_Job&oldid=1955546"
Categories:
Cookies help us deliver our services. By using our services, you agree to our use of cookies.