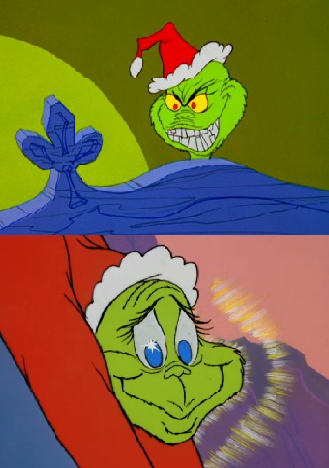 The Grinch before (above) and after (below) a wondrous change of heart.

In Professional Wrestling, an evil wrestler (a "Heel") sometimes has a change of heart and becomes good, thereby becoming a "babyface". The term for this is "Heel Face Turn." Magazines and other promotional material from the various wrestling leagues comment on various wrestlers' changes in alignment nearly as frequently as they actually cover events in the ring themselves.

It doesn't just happen in Professional Wrestling, either. In other genres, it means "bad guy turns good." This usually makes for a good plot, for three reasons:

An encounter with The Messiah, Turn the Other Cheek, a Pet the Dog moment, An Aesop, Deliver Us From Evil, Slap Slap Kiss, spending quality time with one's Morality Pet, discovering that Machiavelli Was Wrong and Being Evil Sucks, Becoming the Mask as The Mole because Good Feels Good, an Opinion-Changing Dream, an Enemy Mine situation leading to Fire Forged Friendship, or undergoing a Mistreatment-Induced Betrayal from an abusive Big Bad superior can all cause a villain to reconsider his or her evil ways.

Sadly, all too frequently Redemption Equals Death... (if there's any redeeming to be had) and when it doesn't, someone still needs to draw that "Get Out of Jail Free" Card.

On the other hand, the bad guy may reject their chance at turning over a new leaf altogether, in which case it's Redemption Rejection.

The many reasons and the probability for a turn are listed in the Sorting Algorithm of Face Heel Turning. A very common fate for a female character in any evil group. But beware, some authors knows the stereotypes of Heel Face Turning and will subvert it willingly.

Compare the Reverse Mole, who is secretly working for the good guys all along. The inverse of Face Heel Turn. May be the result of a person that was Evil All Along. When someone who doesn't care one way or the other is forced to fight they become Neutral No Longer. For characters who can't seem to make up their minds, see Heel Face Revolving Door.

No real life examples, please; it is too subjective to proclaim that someone has joined the "light side" in real life

Examples of Heel Face Turn include:

Retrieved from "https://allthetropes.org/w/index.php?title=Heel_Face_Turn&oldid=1930304"
Categories:
Cookies help us deliver our services. By using our services, you agree to our use of cookies.