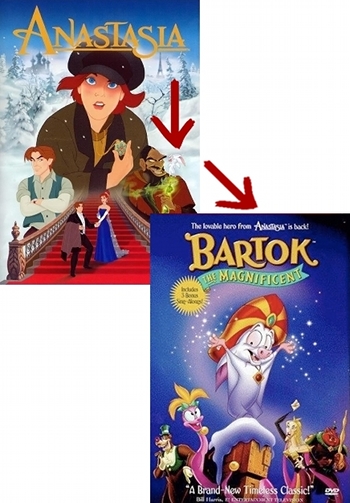 At least the forced perspective necessary to pull off this shot is magnificent.

A minor character who is given a greatly expanded role in the later part of the series, a new adaptation of a story, or in the Expanded Universe. It is usually safer to do this with an otherwise obscure character without much depth, since the likelihood of creating plot contradictions is lower. On the other hand, the character may or may not be allowed to have a huge effect on the plot depending on how much the writer is trying to follow source material. Can lead to some bizarre incongruities in planning (e.g. Overtook the Manga, Restricted Expanded Universe). Sometimes the minor character becomes an Ascended Extra just so the writers can immediately turn them into a Sacrificial Lion.

This naturally occurs as a series goes on for long periods of time and useful for filler, technically not requiring you invent someone whole cloth. Be warned however that this character might be more liked by the Fandom than the writers, who may have no compunction with getting rid of them when convenient.

This also happens somewhat regularly in Fan Fiction. Stories about a minor character who is given his own subplot (or prequel, sequel, or AU) seem to be 'training wheels' for writers who don't quite trust themselves with original fiction yet and are re-using the setting, but basically making up new characters.

Compare the Breakout Character, where a supporting character gains a fandom that rivals or exceeds the main characters and thus becomes more prominent in canon. Compare also the Ensemble Darkhorse where in a similar fashion, a small side character will be readjusted in the course of the same show to gain a more central role in the plot. See Breakout Villain specifically for when a would-be one-shot villain ascends to Big Bad status, either through Ascended Extra or Breakout Character. A One-Scene Wonder is not an Ascended Extra, at least officially; fanfic, on the other hand...

See Mauve Shirt for when a member of the Redshirt Army gets his own name and minor characterization, but still doesn't become more than a minor supporting character in any way. For the villain equivalent, see Mook Promotion. The inverse of this Trope is Demoted to Extra. Retroactive Recognition is when this happens in Real Life.

Compare Red Herring Shirt, only the ascension is intended from the beginning, and Ensemble Darkhorse, where fans become fascinated by a character who canonically has only a very small role, at least initially.

Also, contrast with Demoted to Extra.

Examples of Ascended Extra include:

"And Hitmonchan is definitely his own character now. Seems like just yesterday I only used him to fill out a bully spot with no future plans on what to do with him..."