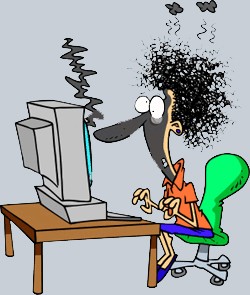 Poor, innocent, hapless newbie wanders into a forum and wonders aloud if that guy in that show should be with that girl in that show. The forum erupts into flames, igniting all the boards that deal with the show, which ignites whole sections of the Internet into a blazing Inferno.

The poor, innocent, hapless newbie has opened the door, causing an Internet Backdraft.

It works like this: Controversial Event X occurs, resulting in flamewars, including ones spanning multiple forums. Internet vigilantes occur who muck up the issue even more into a morass of rumors. Eventually it gets to the point where people are so sick of flamewars about Event X, that this in turns causes flamewars conducted by those who want it to just die. Which it [eventually] does, sort of, in a smoldering-ember sort of way. Then some n00b gives it enough oxygen to make it flare up all over again.

This is also known as "Holy Wars". Trolls and Fan Dumb are drawn to to them like flies to a carcass. Mike Reed's Flame Warriors refers to this, when the metaphorical "door" is opened on purpose, as a Grenade.

The single item in common for these is that people outside the involved communities are astounded that anyone could care enough about the issue to get in any kind of argument about it at all, much less a big argument.

It sometimes leads to people saying "Pass the Popcorn." Here's a video setting the whole concept to a Billy Joel song.

Not to be confused with Internet Counterattack - That's when the internet acts as one to make someone in real life pay.

Examples of Internet Backdraft are listed on these subpages:

Retrieved from "https://allthetropes.org/w/index.php?title=Internet_Backdraft&oldid=1796532"
Categories:
Cookies help us deliver our services. By using our services, you agree to our use of cookies.