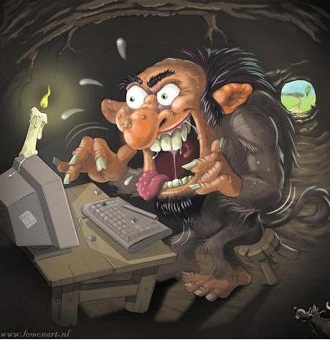 A malcontent that posts messages specifically designed to enrage, confuse, and/or infuriate as many people as possible.

Truly "talented" trolls may even enter the realm of Stealth Parody. The very nature of the internet (from newsgroups to wiki sites) is such that if you try to preach to opponents outright or otherwise offend them, you'll probably be ignored and/or banned. A combination of parody and provocation is more likely to inveigle others and thus become a more effective method of quarreling.

A case-in-point of the GIFT, the troll delights in sowing chaos; he is enamored by the thought that he can set off total strangers and derail entire forum topics by posting one simple message. At the same time, anonymity shields him from the uncomfortable realization that total strangers are currently fantasizing about his brutal and painful death.

The easiest way for a troll to set off an argument is to find a forum devoted to a specific point-of-view—fandom, hobbyists, politics, what have you—and post something inflammatory and profane holding an opposite viewpoint. An experienced troll makes sure to hit as many buttons as possible in a single post, making sure that others on the forum spend an equal amount of time responding to and refuting each point. I.E., on a fan forum for "X", a beginning troll may simply post "X Sucks", while an experienced troll may post a long essay on why "X Sucks" (usually full of lies and mischaracterizations, but using the truth makes it all the more frustrating for the regulars,) and a very experienced troll will even use Sock Puppets to anger both sides of an argument at once. Troll messages are often characterized by poor grammar, poor punctuation, excessive use of net slang and CAPS. Whether this is real illiteracy or an additional attempt to garner a response depends on the individual.

In the world of fan fiction, an author who intentionally posts a story that is stupid, badly spelled, or otherwise insincere is also referred to as a 'troll', as are the stories in question themselves. The goal of such trolls seems to be to either laugh at the people who like their fic, because they're obviously stupid, or to laugh at the possibly self-righteous criticism they receive from more "serious" fic writers. See Troll Fic.

The recommended path for a responsible netizen when confronted with a troll is to ignore him. Replying to a troll is referred to as "feeding" him, and may earn the admonishment of one's peers. Most forums have rules for dealing with trolls, but there is little that can be done to shut one out without setting up significant barriers to new members, so they still trickle in.

Also note that a genuine troll doesn't need to be announced as such. One fallacious use of the term "troll" is to mean "somebody I disagree with". When you see somebody declare their opposition a troll during a debate (especially if it's later in the debate or it's against an established member of the community), it's an Ad Hominem attack as a desperate ploy to win. As such, this in turn became one of trolling tactics. In most civilized communities, it is similar to Godwin's Law in its ability to automatically derail the argument and destroy the respectability of the invoker.

This is a close cousin to the Wiki Vandal, and sometimes another facet of the Single-Issue Wonk. May be the same people, for all we know. Contrast with the Internet (not so) Tough Guy: the troll does not go beyond insults, the Internet Tough Guy will add threats, and sometimes (albeit rarely) acts. Compare with The Gadfly, who is not necessarily a troll but often partakes of some aspects of one.

One may think that the term "Trolling" comes from the way that people verb every noun they can get their metaphorical hands on, but it's actually the other way around: The (by now, mostly forgotten) origin of the term "Trolling" comes from the phrase "trolling for suckers," a reference to trawling as a technique in fishing, where a baited hook is slowly drawn through the water rather than simply being cast and allowed to stay in one place—the idea being that the troll drags his bait through the group without staying around himself. The use of the term "troll" as a noun, and the attachment of mythical beastly trolls to the concept are all more recent additions.

Interestingly, other forums may take a different tack to dealing with Trolls. Certain forums cannot simply remove the trolls, as they consist of a large portion of their userbase. Instead, they defuse trolling with critical analysis of the trolls in question. Certain trolls may even earn renown for consistently posting high-grade trolls.

Note that if what somebody says is truly their honest opinion, no matter how dumb or incomprehensible, they are not a troll. They may still be idiots.

Griefers are a type of troll. Griefer as a specific term often refers to a person who trolls people in online video games by interfering with play and doing everything they possibly can to ruin the fun of other people trying to play the game normally (or stupidly.)

They are not known for their logic.

At one time, the most irritating version of trolling was the "invasion". Entire net communities would become swamped by trolls, derailing them completely. Raiding has become less popular over the years, however, and trolling mostly exists as an individual effort in the modern era.

For an article about mythological trolls, see All Trolls Are Different.

Examples of Troll include: