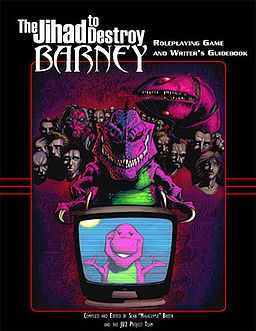 Because role-players are such an important part of Barney's target demographic...

Sometimes there is an entity that by its very nature is meant to appeal only to a certain, if possibly narrow, demographic. It's reasonable to assume that people who do not fall within that demographic group would simply ignore it, right?

Periphery Hatedom is when a character or show receives undue scorn and hatred from groups that it was never meant to appeal to in the first place. It inspires an anti-Periphery Demographic, who respond to them in such a way that you'd think they had committed some unspeakable crime. Expect a complete lack of Parental Bonus, a Fleeting Demographic, and a ton of Facebook pages decrying its "crimes". Consider the contradictions in the phrase "hated teen idol".

This is not to say that the hatred is always undeserved. Any major pop-culture phenomenon is going to make in-roads into the mainstream (at the very least by journalists reporting on the genre), and in the worse case scenario, it may become inescapable, or prove so popular in its demographic that those attempting to Follow the Leader choke out any innovation in other programming for a period. Of course, the Periphery Hatedom makes things even more inescapable, well after the pop-culture phenomenon's popularity has died down. It keeps itself alive.

This may also be an extreme version of Hype Aversion. As in "Dear God, just shut up about it already!!"

Given time, many people tend to get more charitable and less prone to Periphery Hatedoms. This may be the result of the Nostalgia Filter, a mature understanding that other people should be allowed to like whatever they want, or the simple fact that picking apart a single target eventually gets boring and it's very easy to find something else by which to be annoyed.

This trope overlaps with Complaining About Shows You Don't Watch, since quite a bit of these Periphery Hatedom have probably never actually legitimately sat down and watched it, or spent enough time as they would something made for their medium. Ask how many of these people who hate one of these if they had ever seen an actual episode of it (Especially if it's a TV series). Not flash parodies on sites like Newgrounds, not YouTube Poop videos making the characters say sexual innuendos, not shows like Robot Chicken spoofing it, not other web-based spoofs such as comics, actual unparodied episodes. You'd be surprised how many people say they legitimately tried to give it a chance without an excuse for having done it. ("I only watched it because my children watch it on TV all the time!", for example.)

Compare Love It or Hate It, where the demographics are not nearly so sharply defined (and the hatedom rarely overshadows the work) and Bile Fascination, a primary reason for people outside the target demographic to investigate. Contrast Hype Backlash, where a backlash occurs against something people have been told they'd like.

Many Music examples overlap with Dead Horse Music Genre. Can lead to Deader Than Disco when a work's target demographic stops liking it and joins in on the bashing. See also Americans Hate Tingle for regional examples. Can be caused by What Do You Mean It's for Kids?. Moral Guardians are a specific type of Periphery Hatedom, who sometimes subvert the trope by directing their complaints at how they think the work will affect its intended audience. However, they often play it straight by getting the target audience wrong, typically by assuming that everything of a particular genre must be kid-appropriate.

Remember, this trope is specifically for examples where the hate comes from not pandering to a group that it never planned to reach in the first place. Complaining About Shows You Don't Watch when you're within its intended audience is not this trope. And cases of former fans rejecting newer versions of their preferred work/genre almost never fall here unless the work has a Fleeting Demographic (such as a lot of kids' shows, teen pop music, etc.) and the fan has grown out of it. Otherwise, move it to They Changed It, Now It Sucks.

Examples of Periphery Hatedom include:

On top of that, Perry also experiences this among black viewers. Perry got his start staging plays on what's sometimes called the "Chitlin' Circuit", a Vaudeville-esque black theater circuit which primarily caters to older, more conservative, and more religious audiences. African American subcultures experience as much Values Dissonance with each other as they do with anyone else; someone who identifies with Reggie Watts or Aaron McGruder could find Perry quite tasteless, and vice-versa. Perry even threatened to pull some of his content from TBS after one episode of The Boondocks made harsh fun of the Unfortunate Implications and Strictly Formula tendencies of Perry's movies. Either way, Perry caters to a very specific demographic with which many African Americans do not identify.

Retrieved from "https://allthetropes.org/w/index.php?title=Periphery_Hatedom&oldid=1918588"
Categories:
Cookies help us deliver our services. By using our services, you agree to our use of cookies.