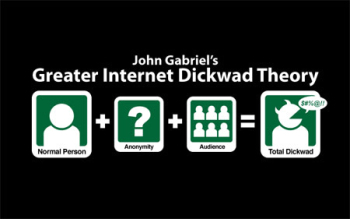 The Greater Internet Fuckwad Theory. First given a name by the boys at Penny Arcade, it is a theory that seeks to illuminate why so many people seem to degenerate into antisocial, pottymouthed, bigoted Jerkasses online, when they might only be mildly unpleasant or even polite and affable in-person.

The equation, illustrated here, is this:

This phenomenon has been studied in an academic setting, and by all accounts the satirical analysis is spot-on; normal people become more aggressive when they think that their behavior carries no real-world social consequences. When people do not have to worry about getting in trouble with their loved ones, school, or employer, getting into a direct physical altercation with anyone, or getting their reputation ruined forever, they feel that they have nothing to lose being shameless, insufferable jerks behind the veil of anonymity that is the Intertubes.

Hence the depressingly large number of people who think that being a Troll is funny, and that the Internet is the perfect place to spew all the bigoted, provocative, or otherwise hateful bile they would never say in real life. The GIFT also contributes to the pervasiveness of cyber-bullying among kids and teenagers, which has led to actual suicides. The academic name of the phenomenon is the Online Disinhibition Effect, but even leading researchers use GIFT outside the journals.

The idea of anonymity's irresistible corruption due to lack of consequences and escape from restraints caused by being watched is extremely pervasive. Think of the people who leave unholy messes in public restrooms. Nobody sees them do it, and they almost certainly wouldn't make a mess in their own home where they'd have to clean it up (hopefully), or their friend's/relative's, when it'd be obvious who did it. The basic idea was first proposed by Plato in The Republic, where he recounts the myth of the Ring of Gyges, one of the original Invisible Jerkass stories.

The only reason why it's not a law like Godwin's Law is because of the Fun with Acronyms.

A Sub-Trope to Serious Business and Internet Backdraft. Vocal Minority is where most of this comes from. See also Internet Tough Guy, Troll, White Knighting, Garbage Post Kid, Resident Freak and Griefer for specific forms of this. Compare What You Are in the Dark.