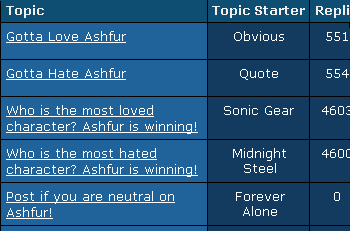 Who the heck is Ashfur?

A character in a series who is loved by one section of the fanbase, and hated by the rest. The causes are varied: perhaps the character appeals to a certain demographic but is a turn-off to another. Maybe they're a Plucky Comic Relief who appeals to the sense of humour of some people but falls flat with others. Sometimes they just highlight existing divisions within the fanbase, or have differing appeal across different cultures, due to different cultural viewpoints or other quirks. Either way, some fans like em, some fans don't, little in the way of a middle ground, flamewars ensue.

This can happen as a result of Shipping related savagery, the divisions often between those who support a rival pairing or just couldn't care less.

To put in tropes, The Scrappy meets Ensemble Darkhorse by way of Broken Base.

See also Contested Sequel which is sometimes a result of Base Breaker characters.

No examples, please. Every character in any work of media is one to some extent. This page simply defines the term.

Retrieved from "https://allthetropes.org/w/index.php?title=Base_Breaker&oldid=1926839"
Categories:
Cookies help us deliver our services. By using our services, you agree to our use of cookies.