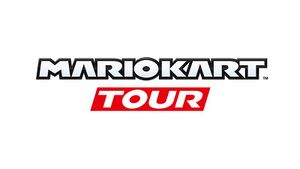 Mario Kart Tour is Mario Kart series' first smartphone entry. The game was first announced on January 31, 2018 and was set to release during Summer 2019 for iOS and Android. The game has been released worldwide in September 25, 2019. Unlike other Nintendo smartphone games, this game requires a Nintendo Account to play.

Basically a Mario Kart lite, this game takes the usual franchise's Wacky Racing shenanigans and puts them in smartphones. Controls are adjusted to reflect this: Racers accelerate and perform tricks automatically, and swipes are used to steer, drift, and throw items. Each racer has their own special items like in Mario Kart: Double Dash!! and their own item inventory limit depending on their track compatibility. Other than the usual cups, the game even includes Bonus Challenges similar to Mario Kart DS's Mission Mode. Opponents use racer data from other players, even though they remain AI-controlled. Because of this, competition is measured in points gathered in races which depend on race position, character and vehicle setup, and general performance like drifting and item use. This plays a role in the weekly Ranked Cups, which pit the player against randomly-selected 19 others. Top 10 placers will be able to obtain the game's premium currency, rubies.

As the game is free-to-start, Microtransactions are involved, of course. Aside from the usual "buy premium currency with real money", the game also includes a gacha system which costs emeralds but can reward players with characters, karts, and gliders. Aside from that, the game has its own in-game shop where the player can spend their common currency (Coins) for drivers, vehicle parts, and upgrade Tickets.