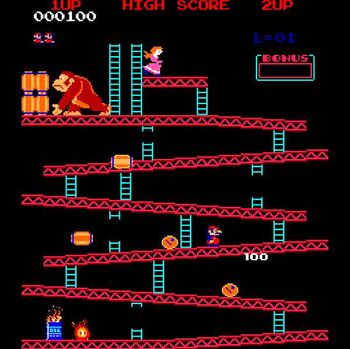 The ape may get top billing, but we all know who the real star of this game is.

One of the ancestors, if not the originator, of Platform Games. Didn't scroll at all, but involved a lot of jumping and climbing, and one level had moving platforms.

The storyline involved Mario (then known as Jumpman) saving a lady named Pauline from Donkey Kong, in an obvious reference to King Kong. Donkey Kong's main weapon seemed to be an endless supply of barrels, which Mario/Jumpman could, well... jump over.

The game's sequel, Donkey Kong Junior, inverted the villain/hero roles; Junior had to rescue his father from Mario's clutches, and Donkey Kong 3 had a gardener named Stanley trying to chase Donkey Kong away from his greenhouse with a bug sprayer.

In 1994, a new Donkey Kong game came out for the Game Boy, using the four levels of the original as a starting point for 97 action-puzzle hybrid levels. The same year, the Donkey Kong Country series began, bringing Donkey Kong back into the hero role.

More recently, the Mario vs. Donkey Kong games have brought back the spirit of the original but focused the gameplay on rescuing wind-up toys, and the Donkey Konga games have made him the host of a Rhythm Game.

DK and friends have appeared in other Nintendo games as well, including the Mario Kart series and the Super Smash Bros. series.

In 1983, it became a segment of Saturday Supercade on CBS, with the voices of Soupy Sales and Peter Cullen. Pauline became Mario's niece, and the titular ape an escaped zoo animal.

The game is more-or-less single-handedly successful for saving the then-fledgling Nintendo of America. After having numerous arcade games tank, the then-president of Nintendo of Japan sent over circuit boards containing Donkey Kong. The Nintendo of America team set on translating the game. Pauline was named after an employee's wife, and Mario was named after their then-landlord, Mario Segale. They installed the game in an old arcade cabinet and set it up at a nearby bar, the Spot Tavern. The first day in, it made $30. The next day, it broke down: too many quarters had caused a short circuit. Soon after that, Nintendo of America was assembling and shipping Donkey Kong machines all over the country, and the company was saved by this single game from Shigeru Miyamoto.

The Donkey Kong character's resemblance to King Kong led to Universal Studios filing suit against Nintendo, claiming trademark infringement. In an ironic twist, Nintendo's counsel, John Kirby, countered that Universal had itself argued in a previous case that King Kong's scenario and characters were in the public domain and the court agreed.[1][2]

The name itself resulted from Miyamoto's minimal knowledge of English at the time. He wanted to call the game "Stubborn Gorilla", to convey that the villain was not acting out of malice or with premeditation. With a pocket-sized Japanese/English dictionary, he latched on to "donkey" as a euphemism for "stubborn", and assumed from King Kong that "kong" meant gorilla. The name did give rise to a number of theories which attempted to explain its origin. One, which appeared on some of the cabinet labels, stated that Jumpman was in fact the titular Donkey.

Tropes used in Donkey Kong include:
Retrieved from "https://allthetropes.org/w/index.php?title=Donkey_Kong&oldid=1878567"
Categories:
Cookies help us deliver our services. By using our services, you agree to our use of cookies.