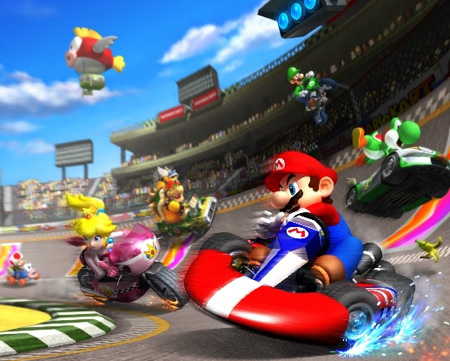 Mario Kart is a successful series of go-kart-style racing video games developed by Nintendo as a series of spin-offs from their trademark and highly successful Mario series of platformer adventure-style video games. Starting on the SNES, the series has graced every subsequent Nintendo console and handheld with at least one installment, with the exception of the Virtual Boy and the Game Boy Color (portable Mario Karts started appearing with the Game Boy Advance).

Unlike a serious racing game like Gran Turismo or Ridge Racer, Mario Kart isn't just about driving technique, but mixes things up with items that racers can obtain from item boxes, while the tracks themselves can have a significant number of obstacles and hazards such as enemies from the Super Mario Bros. series of games. This kicked off the subgenre of fun racers or mascot racers as other companies have often imitated the concept with their own mascots to varying degrees of success.

As the name implies, the games draw major inspiration from the Mario platformers. Racers are characters like Mario, Luigi, Wario, Donkey Kong and Bowser, items are Koopa shells and mushrooms, and stages often visit major locales like Bowser's Castle or a haunted mansion.

Aside from racing for the finish line, all games in the series have also featured a Battle Mode, where the players drive around in a fixed area and attempt to burst each other's balloons with items or hunt for coins or Shine Sprites (from Sunshine).

The games in the series include:

The following tropes are common to many or all entries in the Mario Kart franchise.
For tropes specific to individual installments, visit their respective work pages.
Retrieved from "https://allthetropes.org/w/index.php?title=Mario_Kart&oldid=1680094"
Categories:
Cookies help us deliver our services. By using our services, you agree to our use of cookies.