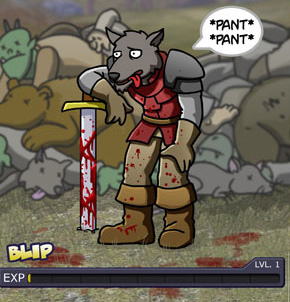 In RPGs, one usually gains strength and abilities through repeatedly killing monsters, over and over again.

Forget trying to figure out the right combination of elemental attacks; just walk around a certain area and kill monsters for a week, then pound away at the boss as if you were the Incredible Hulk.

In video game plots, only the hero ever has this advantage. It never occurs to townspeople to walk around their village and bash slimes until they're strong enough to face the pirate who's taken over.

In online RPGs (and regular ones occasionally), this is known as "powerleveling" or simply "grinding" and is somewhat controversial, as it can be a tedious, mechanical affair criticized for taking the fun out of a game. It is considered extremely rude to level grind and then complain a boss is painfully easy.

The traditional way of level grinding is to kill lots of a very low level enemy, typically rats. However, Metal Slime-type enemies that give out large amounts of experience can shorten the process considerably. Given that the second group are always much more likely to be able to actually kill your character at lower levels, a ladder system is usually employed.

The act of Level Grinding is probably one contributing factor to the creation of the Bonus Dungeon.

Level Scaling can invert the trope, with monsters that scale according to the character's level. This negates the need to grind, but introduces its own set of problems. Final Fantasy VIII, the SaGa series, and The Elder Scrolls IV: Oblivion are all examples of this.

If the game is unbalanced or mean enough to practically require you to level grind, that's Forced Level Grinding. On the other hand, there's Anti-Grinding, where the developers set up something that stops this behavior, as well as Low Level Advantage.

Examples of Level Grinding include:

Retrieved from "https://allthetropes.org/w/index.php?title=Level_Grinding&oldid=1835586"
Categories:
Cookies help us deliver our services. By using our services, you agree to our use of cookies.