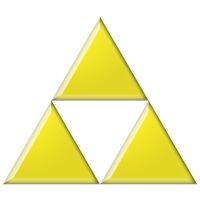 I know what you're thinking: is that three triangles or five?

Three is a magic number.

The Rule of Three is a pattern used in stories and jokes, where part of the story is repeated three times, with minor variations. The first two instances build tension, and the third releases it by incorporating a twist.

This is especially common in storytelling. The third of three brothers succeeds after his older siblings each failed. The protagonist is given three tests and receives the prize after the third. It's almost unusual to find a folktale that does not incorporate the rule of three in some form. This may be an artifact of the oral tradition, in which the stock formula of the first, second, and third attempt makes the story easier to remember.

Following on from the oral tradition, speech-writers have learnt the 'Rule of Three' - listen to a political speech- the points come in threes, from 'Ein Volk, Ein Reich, Ein Fuhrer' to Tony Blair declaring 'Education, education, education'.

The rule of three is also used widely in comedy. Many popular jokes are based on three Stock Characters (e.g. Priest, Imam, Rabbi), all in the same situation. The first two react normally, the third does something ridiculous (but stereotypically in character). In Britain, Englishman, Irishman and Scotsman jokes denigrate either the Irishman as stupid or the Scotsman as a tightwad, while the Englishman is usually the Straight Man of the gag (Unless it's being told by the Scots or Irish. When an American tells it, Englishmen are stuffed shirts.) This is why most Americans have never heard of Wales. Another (geeky) variant is the engineer/physicist/mathematician series of jokes, however, these are virtually never considered offensive, largely because the stereotypes are often jokingly accepted by the members of those three groups. (e.g. The engineer is overly practical, the physicist makes large assumptions, and the mathematician comes up with a correct, but useless answer; these are played up for humourous effect, but have some valid basis)

A more popular variation on the rule is to repeat the same joke or concept three times, but put a twist on the third one that makes it funny again. One version of this is The Triple, wherein a character lists three items - the first two logical and serious, and the third applying a twist or joke. For example, a character might say to a bald person, "Can I get you anything? Cup of coffee? Doughnut? Toupee?" (From The Dick Van Dyke Show.)

Alternatively, the twist can come during the second iteration (such as Chekhov's Skill) failing the first time it's used only to return to its original form on the third pass; this version tends to accompany Chekhov's tropes.

The Overly Long Gag could be seen as a subversion of the Rule of Three, because it fails to deliver the expected twist.

In art, there's a rule of thirds where putting items in the intersections between thirds-lines draws more attention and is more visually appealing than plonking them right in the center, which is considered boring. In design, particularly three-dimensional design such as shop displays, groups of three objects, or objects arranged to form a triangle, are considered most attractive to the eye.

The Rule Of Three may be a subtrope of a more general psychological phenomenon, as threes are well-noted in all forms of culture. Films, books and plays come in trilogies. They have a Three Act Structure, a Beginning, Middle and End. Counts of three elements are used widely in rhetoric, writing and myth: "Ready, aim, fire", "Veni, Vidi, Vici", "Lights, camera, action", "Reading, 'riting, 'rithmatic," "rhetoric, writing and myth". Just try and think about how many times you've heard the phrase, "On the count of three..."

A constructed phrase such as "Veni, Vidi, Vici." that has three grammatically and logically connected elements is known as a Tricolon. When the three elements increase in length, it's a Tricolon Crescens.

This is why there are Power Trios and Terrible Trios.

Sub Tropes include Three Wishes, These Questions Three, Third Time's the Charm, Trilogy Creep, On Three, Counting to Three, and The Three Certainties in Life.

See also Basic Conflicts and other plot devices which often come in Threes or Sevens, and Three Rules of Three, a wiki guideline. Not to be confused with Four, unless you're counting elements, bodily fluids, and other dimensions.[1]

Related to other rules of three in number only or in politics.

Not to be confused with the rule of thirds.

Examples of Rule of Three include:

Retrieved from "https://allthetropes.org/w/index.php?title=Rule_of_Three&oldid=1887255"
Categories:
Cookies help us deliver our services. By using our services, you agree to our use of cookies.