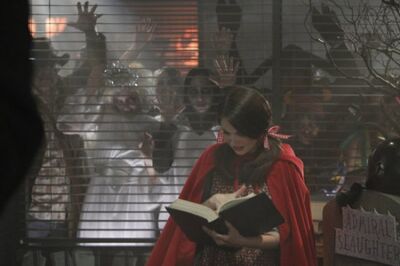 The characters are costumed, their houses are decked out haunted mansion style, they tell spooky stories, and weird (or weirder than usual) things abound! It's the yearly Halloween Episode!

Probably the best-known of these is The Simpsons "Treehouse of Horror" episodes, but most American kids' and genre shows have them. While neither Samhain nor All Saints Eve is ever mentioned, the similarly themed (but more upbeat) Día de Muertos (November 1-2) might be if the characters are on a visit to Mexico.

If it's too scary (or rather, too successful), this may result in Nightmare Fuel. Often A Day at the Bizarro. Either way, coming across a Halloween episode of a show you watch in syndication is often an unexpected treat.

If the cast ends up in Halloween costumes, expect at least some of them to be a Shout-Out or even the occasional Actor Allusion.

There's a subversion/reversal on supernatural-oriented series where Halloween is literally a holiday for supernatural beings, and they all stay home. (Some Fridge Logic here because this assumes that terrorizing the populace is a job for supernatural creatures, rather than leisure activity.)

Examples of Halloween Episode include:

They're so successful getting candy they decide to do it every year.

Retrieved from "https://allthetropes.org/w/index.php?title=Halloween_Episode&oldid=1952841"
Categories:
Cookies help us deliver our services. By using our services, you agree to our use of cookies.