Everything About Fiction You Never Wanted to Know.
Jump to navigation Jump to search
/wiki/Nick Cavecreator 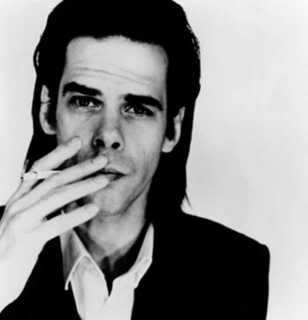 Nick Cave is an internationally renowned musician from the |North East of Victoria. He started out in the Birthday Party, a rather weird post-punk band who would become a big influence on Goth rock. In the middle of The Eighties went on to found Nick Cave and the Cavemen, who fairly quickly renamed themselves to Nick Cave and the Bad Seeds. In recent years he's formed a third band, Grinderman, who very unusually for him play rather straightforwards rock music.

He is also the author of the novels And The Ass Saw The Angel and The Death Of Bunny Munro, as well as the script for The Proposition, for which he and bandmate Warren Ellis (no, not that Warren Ellis) also composed the soundtrack. And he's occasionally acted, most notably in The Assassination of Jesse James by the Coward Robert Ford (he appears as a musician, playing the folk song "Jesse James"), which he and Ellis again scored. The film version of The Road was scored by him and Ellis, and directed by John Hillcoat, who also did The Proposition.

His songs range from gentle love songs, to angsty songs of pain, to full-on murder ballads; he wrote a whole album of the latter. He's also known for deeply held, though unconventional, religious views; his songs and novels are rife with Christian symbolism, though he denies in recent interviews that he believes in a personal or interventionist God (so...Deist, maybe? Post-theist?).

Compare Tom Waits, who has a somewhat similar style, and who is confirmed to be an influence on Cave.