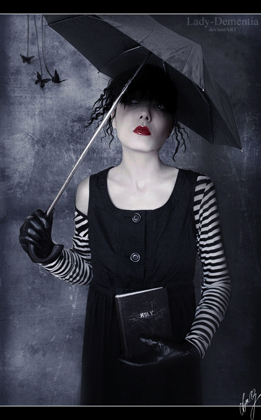 It can't be emphasized enough, the fact that Hollywood really does not understand the myriad and various subcultures of young people and the many subtleties to be found within. Hence, this trope, which refers to stereotyped Goths in popular culture.

Not to be confused with Hipster, although there is some slight overlap.

Not to be confused with Emo or Emo Teen, period, although the latter may be a parody of the former.

Not to be confused with Steampunk, although the two subcultures do share a similar fashion sense and there is some crossover.

Also not to be confused with the Germanic peoples of late antiquity and the early Middle Ages. Though being confused on this one is a stock joke.

As it happens, real Goths are mostly harmless and tend to have a (frequently dark or self-deprecating) sense of humor and irony (the Deadpan Snarker without the Deadpan part); which their fictional counterparts largely lack.

Most goths in fiction will be presented as Eerie Pale Skinned Brunettes who wear only black, leather getups and listen to loud depressing music. It's worth noting that goth is neither a skin tone nor a fashion statement, so most media tend to treat goth characters almost as if it were a fashion or fad for a darker Cutie to go after. Of course, thanks to Hot Topic and its ilk, Goth has been hijacked by a large number of people who think it's nothing but a fashion statement, making for a sort of Truth in Television that utterly infuriates (or nihilistically amuses, see above) "true" Goths. There is also a tendency to equate Goths with vampire wannabees and the vampire-obsessed. While, like BDSM, there is some overlap between the two subcultures, and the post-Victorian vampire can be considered a Goth icon; equating the two in the presence of a Goth can be hazardous to your health.

Please note: Goth as a subculture dates to the early 80s. (Teenagers sometimes think they invented it.) And just to keep things clear, Goths are markedly different from emo people. Woe betide the person who gets these cultures confused in real life.

Although there is a sort of Goth template, this template is built upon and changed dramatically to suit the individuals tastes. In order to be considered truly Goth, one must fulfill the majority of the following requirements (in order from least important to most important):

Note that a majority of these are required- not all of them. Just because someone doesn't dress Goth doesn't mean they aren't- as long as they fulfill most of the other qualifiers on that list, they are indeed Goth (some people just don't like the style. In fact, Claire's markets to the "preppy Goth" niche, crossing what are usually opposing factions). Also, Goths are going to fluctuate as to what degree they display each trait. The last 5 are the most important- at least 3 of these should be displayed full force (preferably 4). Any less than that, and you're probably not dealing with a Goth.

There are a few other things that Goth is not:

Just as much as Biker is a way of life (and overlaps with Goth heavily, if not a subset), Goth is a lifestyle and nothing less.

For the Manga of the same name by Otsuichi, see Goth. For the video game, see Gothic. For the associated musical style, see Goth Rock.

A handy guide to different (stereo)types of Goths can be found here.

Examples of Goth include:

Retrieved from "https://allthetropes.org/w/index.php?title=Goth&oldid=1893406"
Categories:
Cookies help us deliver our services. By using our services, you agree to our use of cookies.