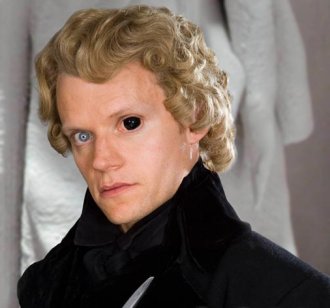 He's totally not the hero.

There are heroes and then there are villains. And the audience needs to know which is which, even before anyone gets to Kick the Dog or Pet the Dog or does anything involving the metaphorical dog. The hero, in order to be properly heroic, will be sickeningly handsome. The villain may be good-looking as well, but if they are, they will often have some type of physical defect or tip-off to their monstrous nature.

People sympathize less with others who have a physical defect.

Often, the defect will be vaguely Satanic. Fritz Lang was fond of these, as is the James Bond franchise. Kids' shows usually use slightly off-white eyes and teeth in their villains, presumably doubling as a less Anvilicious reminder for kids to brush. Supernatural critters often have specific forms of Glamour Failure inherent in their evil nature (think Fangs Are Evil and Femme Fatalons) which they often use to intimidate enemies and prey.

The phrase originally comes from Horace, a reference to Jupiter's wrath.

Many evil shapeshifters have one as well, a telltale sign that they aren't who they say they are. Of course, the scariest and most effective shapeshifters and puppeteer parasites are the ones that avoid this trope.

Since Evil Is Cool, a Red Right Hand may occasionally overlap with Fashionable Asymmetry.

Arguably a deliberate trip to the Uncanny Valley, using the minor defect to provoke a negative audience response. Bonus points if the villain also turns out to be a demon/alien/shapeshifter etc. masquerading as mentioned above.

In heraldry, a red right hand denotes either the province of Ulster or a baronet's status, although that probably has no direct connection to this trope. Nobody likes baronets, after all.

Not to be confused with a Red Right Ankle, nor with A Date with Rosie Palms. For the more blatant examples, see Obviously Evil. See also Came Back Wrong. Does not count if said hand is red because it's burning and telling you to defeat your enemies.

Related to Good Scars, Evil Scars, Scary Shiny Glasses and Hypnotic Eyes. If this appearance also comes with labored breathing or a cough, it's Vader Breath. If this appearance carries discolored veins, it's Tainted Veins. Of course, you should be more scared if you don't see the villain at all. A White-Haired Pretty Boy, the undeathly pale and an Evil Albino will typically fall under this category. Contrast The Grotesque, whose outer deformity hides an inner goodness, although Grotesques may occasionally be given a Red Right Hand, usually symbolic of their struggle against inner evil or madness. May be justified with depicting the villain as having become evil because of being bullied or mocked for the deformity in question (the best known example of this is probably Frankenstein's Monster). If it's a sign of demonic possession, see Mark of the Beast. Also Contrast with Hidden Evil.

Examples of Red Right Hand include:

Retrieved from "https://allthetropes.org/w/index.php?title=Red_Right_Hand&oldid=1938805"
Categories:
Cookies help us deliver our services. By using our services, you agree to our use of cookies.