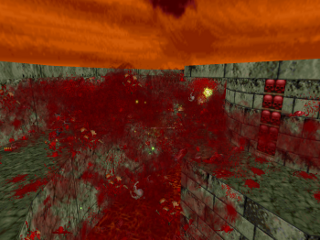 The (usually) FPS equivalent of the deliberately ridiculous splatter seen in Peter Jackson's early films. FPS makers who include gore and dismemberment effects (commonly known as "gibbing" or "gibs", short for "giblets") will often go overboard with them and make relatively simple weapons create far more grotesque splatter than you would expect from their real-world equivalents. This can be especially jarring, as the default handling of violence in most media is to err the other way--undersized or nonexistent entry and exit wounds are more common than ones that properly match the weapon used.

Refuge in Audacity is the key to this trope: Seeing a man realistically take a bullet to the jaw is terrifying and could quickly turn a fun game into Serious Business and Nausea Fuel. But if that man's head instead explodes into a cornucopia of viscera and grey matter, we have a harder time taking it seriously and can relax some.

Of course, expect Critical Existence Failure: the same rocket that blows a player into bite-sized pieces will leave him bruised, but in one piece if he's got enough health.

Compare Made of Plasticine (this is the video game equivalent), Bloodier and Gorier. Compare and contrast Pink Mist, a tamer, more realistic phenomena usually associated with real world head shots. See also the Chunky Salsa Rule and Overdrawn At the Blood Bank. And, of course, Bloody Hilarious.

Has nothing to do with a certain NCIS agent behaving in an amusing manner. As if he'd ever behave ludicrously.

Examples of Ludicrous Gibs include:

Retrieved from "https://allthetropes.org/w/index.php?title=Ludicrous_Gibs&oldid=1902952"
Categories:
Cookies help us deliver our services. By using our services, you agree to our use of cookies.