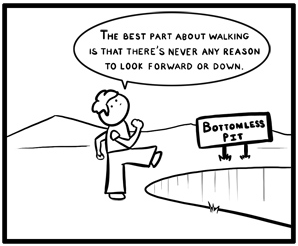 Some things just shouldn't be said, even in jest. Taunting a monster or Bullying a Dragon is likely to end badly. Monologuing will invariably give The Hero the time he needs to defeat you. And then there's this trope.

Tempting Fate is when a character says something that dares the universe into making things miserable for them, and the universe takes them up on the challenge. Oftentimes, the character is commenting on how they've hit Rock Bottom and how things couldn't possibly get any worse — right before things do get worse. Conversely, they may talk about how things are absolutely perfect, only for their world to come crashing down five seconds later.

And sometimes tempting fate can get downright lethal. For example, that guy in every horror movie who tells his friends "I'll be right back" is most assuredly not going to be back. Or that guy in every war movie who shows that picture of his family to the others and expresses his hope to get through this and make it back home to them, which all but ensures that he will not make it. Or that veteran cop in every action movie who's just several days away from Retirement, and thus doomed to be gunned down in his final case. Finagle's Law can be a bitch.

The fate-tempting words may be followed up by a Genre Savvy friend saying "You Just Had to Say It!"

Compare Schmuck Bait. For the supertrope to this, see Trope Telegraphing. Contrast the Godzilla Threshold for where things really can't get any worse.

Examples of Tempting Fate are listed on these subpages:

"Something on All The Tropes needs updating? Hold my beer and watch this!" (wiki goes offline)

Retrieved from "https://allthetropes.org/w/index.php?title=Tempting_Fate&oldid=1836156"
Categories:
Cookies help us deliver our services. By using our services, you agree to our use of cookies.