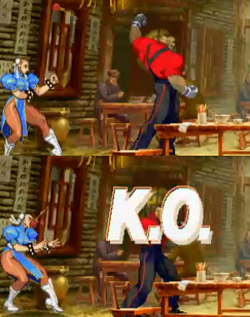 Dudley rose to the occasion of demonstrating this trope.

Winning feels good, and the more humiliating it is for your foe, the greater the satisfaction. Who cares about good sportsmanship and "being big about it"? Forget giving that cardboard villain who kidnapped the princess a Last Second Chance, you just want to grind that Smug Snake's head into the earth in the most soul-crushingly cheap way possible for all the grief he's caused you. Or because you can. Both are good reasons, really!

Enter Cherry Tapping, the video game equivalent of the Humiliation Conga. Cherry Tapping uses strange and/or weak "weapons", or powers that are lame, weak, and/or stupid looking to defeat powerful, fear-inspiring foes and cheapen their value and status as Bosses. If you're playing an FPS, bonus points if you rough up their corpses after they get killed. It can be a way to show off crushingly superior fighting technique by using a Joke Character in a fighting game; a slow, weak melee weapon in a war game; or shameless abuse of Level Grinding to kill the Big Bad with a feather duster.

Cherry Tapping is sort of the opposite of strategies like Elemental Rock-Paper-Scissors which exploit the enemy's inherent weaknesses For Massive Damage. Even if it is a One-Hit Kill à la Revive Kills Zombie, Cherry Tapping is purposely using weapons others think of as weak to humiliate, ignoring other items in the arsenal that do damage at a more effective rate. Cherry Tapping is sometimes referred to as Woodpeckering, can (and often will) induce Death of a Thousand Cuts, requires being Willfully Weak, and often goes to show even a Big Bad with Contractual Boss Immunity can be utterly humiliated. May be a variation of stat/skill grinding, if what counts is using the skill as such or hitting, rather than significant results.

For a seemingly weak attack that actually masks a hell of a lot of power, see Finger-Poke of Doom. For the item equivalent of that, see Lethal Joke Item. For the absolute opposite end of the killing spectrum, There Is No Kill Like Overkill. A great metafictional display of being Weak but Skilled.

Not to be confused with that other "cherry".

Examples of Cherry Tapping include:

Retrieved from "https://allthetropes.org/w/index.php?title=Cherry_Tapping&oldid=1947753"
Categories:
Cookies help us deliver our services. By using our services, you agree to our use of cookies.