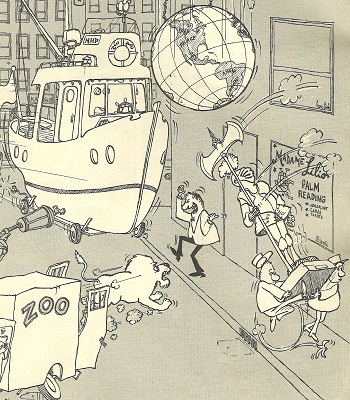 In Which a Trope Is Described multiple things happen to a character, any of which ought to be fatal. Eventually, one of them is.

There can be several reasons for this:

Basically, it's one of the ways you can kill an Implacable Man or someone Made of Iron. In video games, this is often a Recurring Boss.

Related to a Self-Destructive Charge and to There Is No Kill Like Overkill (in this case, there is no kill besides overkill). Might be done because someone wants to Make Sure He's Dead. Sometimes the person actually does want to die, but screw it up so it becomes a Bungled Suicide.

The trope takes its name from a myth spread by Prince Felix Yusupov about the assassination of Grigori Rasputin in 1916. Ironically, Rasputin's Real Life death wasn't at all Rasputinian; the 1916 autopsy report (as discovered after the Cold War and reviewed by American and Russian doctors in 2002) shows that Rasputin was shot in the head with a .455 Webley and died instantly. But his killers wanted to portray him as a near-indestructible minion of Satan, so they made up an elaborate story about how he survived poison, beating, and bullet wounds only to drown in the Neva. Later embellishments by Yusupov (he thought up a new one every time he was short on money) even had Rasputin dying of hypothermia, having attempted to claw through the ice that covered him.

His death is also disputed, as without Rasputin, who would be Alan Moore?

The myth of Rasputin's death fulfills all five of the possible reasons listed above.

Examples of Rasputinian Death include:

When Frank later "meets" the lackey's sister, after gunning her down he makes a point of emptying the clip into her, just to make sure.

He has serious fun with this in Carpe Jugulum, where various subtypes of vampire have increasingly silly requirements for true death, starting at the weirdest end of the real life myths and going from there, including mention of a vampire who wouldn't die until carrots got hammered in its ears! The protagonists muse about just how much trial and error it must have taken to get it right.

The entire episode basically consists of Your Princess Is in Another Castle as each suspect is cleared of actually landing the killing blow and ends with Doc Robbins sighing as he lists the various "mitigating factors" in his report.

Then, at the end of the fourth game, he shows up again, perfectly healthy. He's just that awesome. Then he dies of FOXDIE, but manages to endure before expiring in 15 minutes, despite being in pain from a viral-induced heart attack.

Retrieved from "https://allthetropes.org/w/index.php?title=Rasputinian_Death&oldid=1890972"
Categories:
Cookies help us deliver our services. By using our services, you agree to our use of cookies.