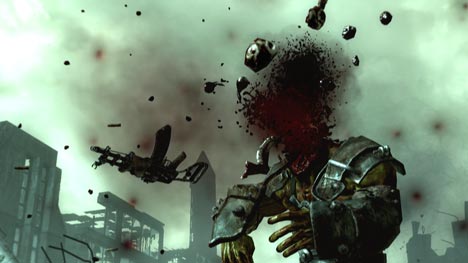 I don't think that a medkit is going to do him much good now.

An exception to the Hit Points system common to virtually all role playing games, in that massive head trauma is automatically lethal to a character regardless of the number of hit points they have. This is a fairly common house rule in many Tabletop Games groups, but a few systems have it explicitly built in, particularly those on the cynical side of the Sliding Scale of Idealism Versus Cynicism.

The Chunky Salsa Rule may also refer to rules specifically describing the effects of taking much more damage than is required to kill a character, which is to say reducing the entire character to the consistency of chunky salsa. In addition to the grotesque visual, this may also negatively impact attempts to bring the character Back from the Dead.

Please note that this trope is not about the splatter itself. For that, see Ludicrous Gibs.

Examples of Chunky Salsa Rule include:

Retrieved from "https://allthetropes.org/w/index.php?title=Chunky_Salsa_Rule&oldid=1800272"
Categories:
Cookies help us deliver our services. By using our services, you agree to our use of cookies.