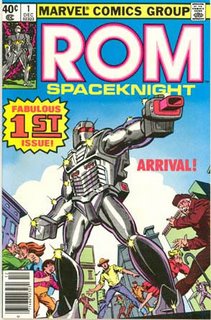 Oh My God! It's a life-sized Action Figure!

Rom The Space Knight was an action figure sold in 1979 by the toy company Parker Brothers. While the toy itself soon faded into obscurity, its comic book tie-in series, put out by Marvel Comics, lasted until 1986. It had a small but loyal following, mostly due to the writing of Bill Mantlo, who excelled in creating epic science fiction and fantasy sagas, and used his comics to expand the corners of the Marvel Universe (Another example of this can be seen in Mantlo's Micronauts series, also a toy adaptation.)

Neither should it be confused with Rom Stol, the main character from the anime series, Machine Robo which in itself was based on a toyline.

Story:
The events in the comics began 200 years ago on Galador, a planet in the "Golden Galaxy" whose population was (apparently) perfectly human (no explanation was given for this.) When the Galadorians find out that they're about to be invaded by the evil, shapeshifting "Dire Wraiths", they worry because the have no space fleet to defend themselves with. The Galadorian scientists instead invent cyborg "armors" that could be used to give a person the powers to fight in space on their own. Galador's "Prime Director" asks for volunteers to be transformed, promising that their "humanities" (the parts of their bodies removed to fit in the armors) would be preserved and restored to them after the Wraiths' defeat. The first to volunteer was a young man named Rom; his example inspired a total of 2000 other Galadorians into becoming Spaceknights. Rom was given Galador's greatest weapon, The Neutralizer, which had the power to banish Dire Wraiths to the dimension of Limbo without killing them (the other knights had other weapons.) He also possessed The Analyzer, a device that could make a Wraith's true form visible.

The Spaceknights repelled the Wraith fleet, but Rom pursued it to their home planet, "Wraithworld", causing them to scatter across the cosmos and infiltrate other planets. Feeling responsible, Rom swore he would not reclaim his humanity until all Wraiths in the universe had been defeated. The rest of the Spaceknights again vowed the same.

200 years later, following the Wraiths' trail, Rom arrived on Earth, in the tiny town of Clairton, West Virginia. The town had been infiltrated years before by the Wraiths. Unfortunately, Rom's banishing of the disguised Wraiths caused it to look like he was disintegrating innocent people; his robot appearance didn't help things. He was however befriended by a local girl called Brandy, who helped him hide himself and find the Wraiths. Eventually her boyfriend Steve also got into the act, thought a triangle started forming when Brandy began to develop feelings for the noble hero.

Eventually all the Wraiths in Clairton were banished, and the rest of the townsfolk were let in on the secret; Clairton became Rom's base now, from which he hunted Wraiths elsewhere. A female Spaceknight, Starshine, arrived later (it turns out she too was in love with Rom) but soon got killed. A Wraith sorcerer then magically transplanted Starshine's armor on Brandy, to grant her secret wish of fighting beside Rom (for the Wraith's own purposes of course.) When a minor superhero named The Torpedo (whose power-giving costume, it turned out, had been created by Wraiths) moved into Clairton, Rom felt it was safe to leave the town in his hands, and started traveling around Earth alongside Brandy (the new Starshine), looking for more Wraiths.

In Rom #50, in what may be a case of Creator Breakdown (something similar happened on Micronauts) the series took a darker turn. The female Dire Wraiths, blaming the males for their failures, killed them and took over the operation to conquer Earth (don't ask how they intended to reproduce later.) These new Wraiths were hideous, and had the ability to literally suck the brains out of people, allowing them to gain their memories. They decided to go public with their invasion, beginning by massacring everyone in Clairton, including Steve and the Torpedo. On the plus side, when these Wraiths decided to openly attack SHIELD on their helicarrier base itself, the various Earth governments finally realized the threat and threw all their support behind Rom as field leader to defeat the menace.

Soon after, Brandy was once again turned human, and the Wraiths magically summoned Wraithworld into Earth's solar system, to power up their evil magics. This proved a mistake when Rom, using a device built by Forge of the X-Men that boosted the Neutralizer, was able to banish Wraithworld itself into Limbo, thus robbing all Wraiths in the universe of their powers. His enemies finally defeated, Rom decided to return to Galador, leaving Brandy behind (since he believed his "humanity" had been destroyed in an earlier story). However, Brandy ran into the cosmically-powerful Beyonder during the events of the second Secret Wars Crisis Crossover, and asked him to send her to Galador. He did- but she arrived before Rom did, only to find out that a second Generation of Spaceknights, created to protect the planet in the originals' absence, believed themselves superior to normal humans and had killed nearly the planet's entire population! Brandy managed to avoid them long enough to be saved by Rom and the first Spaceknights, but all normal Galadorians were killed, and all the Spaceknights' humanities were destroyed as well. Only Rom's, which it turns out had been hidden, not destroyed, had survived. Rom returned to human form, and stayed with Brandy on Galador to repopulate the planet, protected from space by the good Spaceknights.

Marvel no longer has the rights to Rom himself, but they do own everything else from the series including the Spaceknights (Mantlo pretty much invented everything for the comic) and they occasionally make cameos; for example the (human) Rom, unnamed, and Brandy were at Rick Jones' wedding, and a 2000 miniseries set in the near future featured Rom's sons as Spaceknights.

The Wraiths have returned as well, mainly in a New Warriors story arc involving Turbo, The Torpedo's successor.

Tropes used in ROM Spaceknight include: