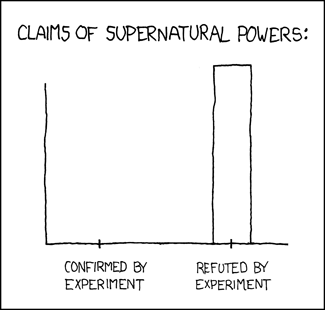 But science can't prove everything, right?

Once upon a time in Real Life, Magic was indistinguishable from Science, and both went hand in hand with Religion. Over the course of history, they began to drift apart. By the time of the Industrial Revolution, Science was an independent field.

The modern scientific community is highly skeptical toward claims of the paranormal, and largely disbelieves in the existence of magic—albeit because magical practices, such as drinking willow bark tea for headaches, become science when proven. While, for the scientists, this is just a question of evidence (and science has no problem over time accepting counter-intuitive phenomena like radioactivity, meteorites, hypnosis and superconductivity....eventually....when there is evidence), some people interpret it to mean that science and magic are fundamentally opposed. Some authors will then transplant this opposition into a Speculative Fiction setting: Magic really does exist, but for whatever reason, it's not on speaking terms with Science or Technology. However, what many Anti-Magic Scientists and Anti-Science Magicians seem to forget is that since most magic systems follow a set of rules, magic itself can be seen as a form of science. Nonetheless, one should not expect different types of magic systems to be reconcilable, except when they are. Interestingly enough, in pre-scientific times, all of the modern sciences, all forms of industry, and the very laws of nature itself were considered to be magic.

Psychic powers generally blurs the line between the two.

There are several different ways this conflict can play out:

In some of these settings, if one does successfully mix Magic and Technology, the result is (rightly or wrongly) decried as an abomination in the sight of Nature and the Powers That Be.

Can result in (or is deliberately designed to justify) Medieval Stasis; no technological advances are made, either because beyond a certain point because mages accomplish what is needed, or simply because science doesn't work the way it does in the real world. If only a few people are mages, then there's a clear caste system. The Magocracy clearly wouldn't want competition. This doesn't mean no science goes on in these settings though; the scientific method may be applied not to creating technology, but to study a Fantastic Science.

If you were looking for a trope where scientists and wizards actually get into a brawl, see The Magic Versus Technology War.

Examples of Magic Versus Science include:

Retrieved from "https://allthetropes.org/w/index.php?title=Magic_Versus_Science&oldid=1691570"
Categories:
Cookies help us deliver our services. By using our services, you agree to our use of cookies.