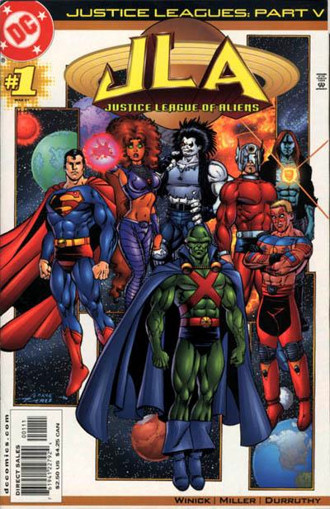 "Justice League of Aliens." Yep, the guy with the big red "S" on his chest, the white dude with the silver helmet, and the Guy with the buzzcut, too.

Their internal physiology may well be different, whether a little or a lot or just none, but otherwise they appear to be the genuine article.

In-story, this occasionally leads to a Handwaving story about how all the races have some common ancestor. Other times, it gets justified by using a Transplanted Humans story. Out-of-story, this is often explained by the fact that there are remarkably few non-humanoids in the SAG or Equity. Other explanations include the idea that a humanoid form is the natural result of any evolutionary path (Humans Are Special on Evolutionary Levels). Recent research hints at this being true to some extent; many species seem to be engineered by evolution for maximum fuel efficiency. The bipedal human body has remarkable agility and stamina for its size. Although there are some notable flaws like weak joints and a narrow birth canal, our impressive cognitive abilities and incredibly complex social structure evolved to counter these. There's also a real phenomenon known as "Convergent Evolution" whereby species that originated in different areas eventually develop into things that look similar because it's a useful form.

This trope also covers shape-shifters who budget-savingly stay in human form around humans.

In 1950's movies, this also could be used as an actual part of the theme of the story, as the idea that these sorts of aliens could pass completely for humans made a rather handy metaphor for Communism.

The bottom rung of the Alien ladder, below Rubber Forehead Aliens and Intelligent Gerbils. Note that, for this trope, the alien must be visually indistinguishable from a human. "Human, but with blue (or purple, orange, green, etc.) skin" falls under Rubber Forehead Aliens. Aliens with cultural rather than biological similarities fall under Inexplicable Cultural Ties.

Technically there could be another rung below this one on the Alien ladder: Caucasian Aliens. There are many fictional planets where the aliens not only look human, they are all Caucasian-looking. This is rife with Unfortunate Implications. The opposite situation, where the alien race is genuinely alien, but they are all African-looking, or Asian-looking, etc., is vanishingly rare (and would probably carry a different batch of Unfortunate Implications).

Reasons for using this trope may vary. Sometimes it may make audience relate to the character better (because people aren't going to like a character who looks, you know, "different") or to have the character live among ordinary humans without undue complications. Or it might just be because they can't afford the makeup and rubber foreheads. Or sometimes, well....

Contrast with Starfish Aliens (where the aliens are nothing like humans), Humanoid Aliens (where aliens have a similar shape, but not quite human) and Human Subspecies.

Examples of Human Aliens include:

Retrieved from "https://allthetropes.org/w/index.php?title=Human_Aliens&oldid=1945809"
Categories:
Cookies help us deliver our services. By using our services, you agree to our use of cookies.