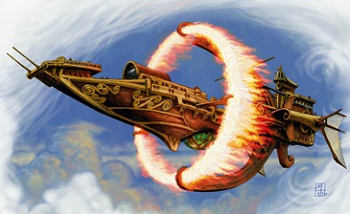 Like an airliner, but with fire elementals instead of thrusters.

Advanced ubiquitous magic always seems to end up working just like technology. The car engine might be powered by a fire elemental, and the telephone may work through the principle of contagion, but this doesn't affect the man in the street. They just get in the car and drive away, or pick up the phone and talk—no special talent required, just as if the devices were technological.

Magitek (or "magitech") often appears to combine magic with modern technology or at least something distinctively mechanical: traditional heat engine or even an electrical generator powered by or powering a magic spell, or a giant mecha that can inexplicably shoot ice from an empty hand. Sufficiently Analyzed Magic frequently causes this, but isn't necessary, since a Black Box is almost as good if it's reliable and cheap enough.

The Ur Example is Robert A. Heinlein's 1940 novella Magic, Inc., making this Older Than Television. The story is an alternate reality where the 1940 USA is just like it really is, except that magic is real. For example, your taxi is likely to be a flying carpet, but otherwise the same (cabbie, meter, so on). The Trope Namer is Final Fantasy VI, where the Gestahlian Empire had suits of Power Armor, dozens of Humongous Mecha, and fleets of Magnificent Flying Machines, all powered by draining the life essence of enslaved magical creatures. The machines built by the Empire were known under the blanket term "Magitek."

Examples of Magitek include:

Yu-Gi-Oh! 5D's heavily blurred the lines of magic and technology in the second half of the show. The old Momentum Reactor somehow opened a Hell Gate due to the accident that caused Zero Reverse; main antagonists are cyborgs and are never stated to have any magical connections, but they can shapeshift, teleport and levitate, among other magical-type abilities.

Retrieved from "https://allthetropes.org/w/index.php?title=Magitek&oldid=1953686"
Categories:
Cookies help us deliver our services. By using our services, you agree to our use of cookies.