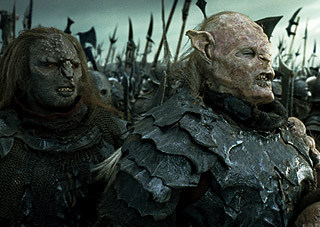 Yep, every last one of 'em.

A common conceit of the sci-fi and fantasy genres (and especially games of those genres) is the notion of not an organization, not a clan, not a city, but an entire race of bad guys who brag about how Evil they are. All of the racial members behave evilly, because - let's face it - Star Trek would've been really boring if Kirk had to interview every Klingon he met before punching them out. This may sometimes go so far that a Final Solution against the defined-as-evil race is portrayed in a quite cheerful light.

This trope is actually Older Than Dirt—are there any myths and folk tales that don't have some creatures that are portrayed as always evil? Naturally, its subversions have also existed for quite a long time.

How, exactly, these folk have unanimously embraced one ethos (especially one so detrimental to the survival of the group), when humans have been known to kill each other over how many fingers are used in a ritual blessing, is often unknown and inconsequential. When the ethos is justified, often the race is explicitly artificial in origin, rather than natural. Their nature is determined by the evil individual who created them as slaves/warriors/etc—thus dodging the problem that Children Are Innocent. This is often reinforced by having their society believe in Asskicking Equals Authority...and in this case, anyone weak (read: good) will be killed very quickly.

Expect the national dress to be Spikes of Villainy and black leather, the reason for keeping pets to be kicking, and their language to be the Black Speech.

The Defector From Decadence typically comes from this stock, usually with some qualifier or after having become an Ascended Demon. Having an ancestor from such a race usually qualifies a character's evil (or potential for it) as being "In the Blood".

It's quite common for a fantasy Big Bad to have an Always Chaotic Evil race at the ready to use as Mooks. It's usually justified as an arrangement among the various Powers That Be. The heroes are likely to be from races where good and evil are possible, to contrast their differences.

May be the subject of a Genocide Dilemma. This is Planet of Hats when evil is the hat. For evil professions like pirates and hitmen, see Villain by Default. When a fictional character (whether human or a member of another fictional race) wrongly and unreasonably believes that a fictional race in his/her world is this trope, it's a case of Fantastic Racism.

A member of a fictional race holding the same unjustified and false belief about humans would likewise be Fantastic Racism. For cases where humanity, aliens, or predators really are this trope, see Humans Are the Real Monsters, Aliens Are Bastards and Predators Are Mean. For a trope that includes cases where animals are Always Chaotic Evil, see Cats Are Mean, Wicked Weasel, You Dirty Rat, and Reptiles Are Abhorrent.

Be careful when writing these: may lead to Unfortunate Implications.

See also What Measure Is a Non-Human?, My Species Doth Protest Too Much, and Scary Dogmatic Aliens. Compare Lawful Stupid Chaotic Stupid. Contrast Always Lawful Good. Should not be confused with Chaotic Evil.

No real life examples, please; no group of people can be accurately described with blanket statements.

Add Examples, ya scum! Get crackin! If He catches you lollygagging, you knows what will happen!

"poor Lake, poor Gedney... and poor Old Ones! Scientists to the last - what had they done that we would not have done in their place? God, what intelligence and persistence! What a facing of the incredible, just as those carven kinsmen and forbears had faced things only a little less incredible! Radiates, vegetables, monstrosities, star spawn - whatever they had been, they were men!"

"We are what we are, Niall. Neither as good nor as evil as others paint us." ~ Irial.

Solomon: Daleks, ain't we the same? Underneath, ain't we all kin? See, I've just discovered, this past day, that God's universe is a thousand times the size I thought it was. And that scares me. Oh, yeah, terrifies me right down to the bone. *Hopeful music starts playing* But surely it's got to give me hope, hope that maybe, together, we can make a better tomorrow. So, I beg you, now, if you have any compassion in your hearts, then you'll meet with us, and stop this fightin'. Well... what do you say?
Dalek: Exterminate! *Shoots him*

... my experience suggests: write in Monster Manual that among 100 cambions one is Good, and this one will get into adventure.

Noah "The Spoony One" Antwiller: "If there's a way of being a non-evil lich, I'm calling bullshit."

King Bulblin: Enough. I follow the strongest side!... That is all I have ever known.
Midna: Link... He... he spoke.

What is better? To be born good, or to overcome your evil nature through great effort?

Unlike Goblins, the setting is close to entirely consistent with the D&D source material. Out of several arcs involving a stuffed up Knight Templar Paladin who "generously" gives the main character Roy time to "improve" his behavior. He eventually gets her guard down by apologizing—then condemns her for her own faults. This is similar to the way in which "evil" races are treated - while the sociopathic serial killer in the troupe is occasionally given a free pass because he's a halfling (often harmless and jovial and cute) -- or more likely because, overall, he does more good than harm, even if not quite intentionally.