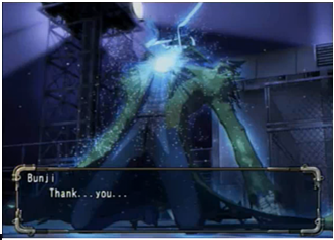 At some point in the past, a character had a traumatic experience, or found themselves dishonoured, or committed a crime they could not repay or lost everything worth living for. For whatever reason, instead of just committing suicide, they went off seeking battles to fight, hoping to find an enemy who would kill them, and achieve an honourable, heroic or otherwise acceptable death.

Only they suck at dying.

They found they were far too good at the "fighting" part. And for whatever reason (usually honor), they don't hold back.

Consequently, they travel, seeking greater and greater enemies to fight, hoping to find a Worthy Opponent to finally kill them. Sometimes they'll fail to die so spectacularly and repeatedly that they acquire riches, renown, ranks or romance as a result of their exploits. This rarely, but sometimes, stops them.

They generally fulfill a role somewhere between the Blood Knight and The Atoner, depending on their outlook and cause. They may be an opponent to the main characters, seeking them as a warrior who can best them, or they may help the heroes in whatever immensely dangerous task needs doing. Ironically, the Death Seeker usually dies shortly after finding a reason to live.

If a villain is one of these, it's sometimes mixed with shades of Nietzsche Wannabe or Omnicidal Maniac: they want to die, and they don't care if they have to drag the rest of creation down with them to do it. The worst of them want to destroy everything else too.

Another variation is a warrior who, upon finding out that he is dying (from a disease or curse, for example), seeks a death in combat instead, seeing it as a more honorable or at least desirable end on the field of battle than lying on his deathbed.

Another variation is that unfortunate people realize Who Wants to Live Forever? and they want to move on.

Another variation is a Shell-Shocked Veteran, usually a commanding officer of some sort, suffering from a major case of Survivor Guilt.

Compare The Berserker. Contrast Please Kill Me If It Satisfies You (a character offers someone to take his life due to remorse) and Martyr Without a Cause. Also Immortality Seeker, for those seeking immortality instead of death. Martyrdom Cultures may regard such a character as a role model. Compare and contrast Not Afraid to Die, where someone in definitely unafraid of death, but isn't actively seeking it out. Likely to cause a Threat Backfire to any death threat, for obvious reasons. Also see Miles to Go Before I Sleep.

Examples of Death Seeker include:

Retrieved from "https://allthetropes.org/w/index.php?title=Death_Seeker&oldid=1904761"
Categories:
Cookies help us deliver our services. By using our services, you agree to our use of cookies.