Everything About Fiction You Never Wanted to Know.
(Redirected from Sega Master System)
Jump to navigation Jump to search 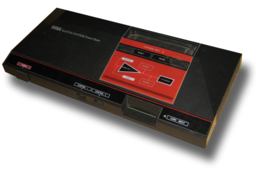 Now, There Are No Limits.

The Sega Mark III was Sega's second video game console in Japan. Their first one was known as the SG-1000, which had an updated model called the SG-1000 II (which is where the "III" in "Mark III" comes from). Realizing the SG-1000 was not competitive enough with Nintendo's Family Computer, Sega significantly upgraded its hardware, which had been nearly identical to the ColecoVision and similar to the MSX computer platform, giving the Mark III graphical capabilities superior to both the MSX and the Famicom. The restyled international version of the SG-1000 Mark III was introduced under the names "Sega Base System" and "Sega Master System," though the former name soon disappeared.

All things considered, the Master System was probably the most powerful of the 8-bit systems,[1] although the NES was able to catch up somewhat with the help of add-on chips.

The Mark III was rereleased in Japanese with the Master System name and styling, and also with an FM synth card (never included in the international version) to enhance the quality of chiptunes. However, the Master System was discontinued early in Japan, soon after Sega introduced the 16-bit Mega Drive. The Master System lasted only a year or two longer in the United States, although its failure to gain ground was largely due to Nintendo trying to monopolize the market there, but it did gain a lot of ground in Europe and South America. Heck, games were still being developed for the Master System in Brazil by the mid-to-late 90s (such as a port of Street Fighter II: Champion Edition).

Although Sega's own series didn't really gain ground until the Genesis, their popular Phantasy Star series got its start here. Their handheld, the Game Gear, uses hardware quite compatible with the Master System, and converters exist to run games on each other.

The following 61 pages are in this category, out of 61 total.