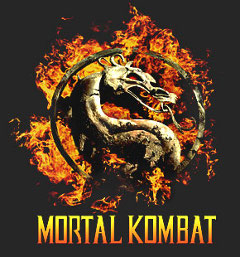 Mortal Kombat is a Fighting Game released in arcades in 1992; it was later ported to the Genesis and Super NES, amongst other console systems.

The basic storyline of the game was similar to other fighting games at the time: Mortal Kombat is a Shaolin martial arts tournament which has been corrupted by its grandmaster. The competitors in this tournament -- Liu Kang, a Shaolin monk; Johnny Cage, a Hollywood action film star; Sonya Blade, a United States Special Forces agent; Kano, a mercenary/killer-for-hire; Raiden, the God of Thunder; Scorpion, the reborn specter of a murdered ninja; and Sub-Zero, an assassin for the Lin Kuei ninja clan -- will fight each other for the right to face the grandmaster, Evil Sorcerer Shang Tsung, and his champion Goro for the title of Mortal Kombat's champion.

The full story wasn't finalized until after the film adaptation was made -- which turned the game's basic plot into something more complex. The Mortal Kombat tournament is a balancing device put in place by the Elder Gods; it acts as an "arbitrator" of sorts, giving realms with interests in another realm a chance to compete for the right to invade. Under the rules set forth by the Elder Gods, one realm must win ten consecutive Mortal Kombat tournaments in order to have the opportunity to invade another. Shang Tsung competed in -- and won -- the Mortal Kombat tournament generations prior, but was later dethroned by the Great Kung Lao, a high-ranking Shaolin monk. At the following tournament, Shang Tsung had a plan: he entered a four-armed monster from Outworld named Goro into the tournament. Goro proceeded to kill the Great Kung Lao, which allowed Shang Tsung to take control of the tournament. All of this was done at the command of Outworld's emperor, Shao Kahn, who has plans for conquering Earthrealm. At the time of the events of the game, Shang Tsung has been overseeing the tournament for five hundred years, and Goro has won eight more consecutive tournaments (bringing the total to nine). The Mortal Kombat tournament depicted in this game is the tenth tournament Outworld must win before Shao Kahn gains passage to Earthrealm, which makes it the deciding battle: Earthrealm must defeat Goro and Shang Tsung or face destruction via Outworld's invasion.

Mortal Kombat is known for being one of the most famous games to use digitized actors (the first was Pit-Fighter). The game also stood out at the time of its release due to the (semi-)realistic depictions of blood and violence -- especially with its infamous Fatalities. This is the only game in the series to used a score system. It also featured an Easter Egg in the form of a "bonus" battle: by meeting certain requirements, a player could face Reptile, a Palette Swap of Scorpion and Sub-Zero who has a mix of both ninjas' powers.

Tropes used in Mortal Kombat (video game) include:
Retrieved from "https://allthetropes.org/w/index.php?title=Mortal_Kombat_(video_game)&oldid=1716744"
Categories:
Cookies help us deliver our services. By using our services, you agree to our use of cookies.