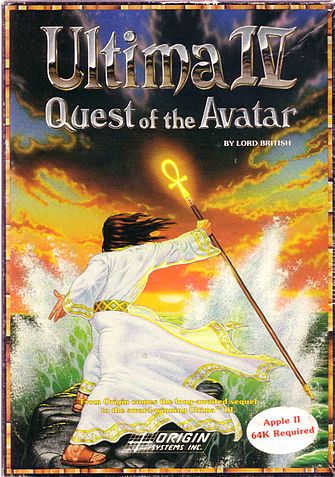 Ultima IV: Quest of the Avatar was a 1985 video game. No one can deny that Ultima IV was a masterpiece. It catapulted several new concepts into the notion of role-playing, and the graphics and music were groundbreaking at the time (and frankly, still are).

In the Magical Land of Britannia... all of the Big Bads are dead. The evil Wizard Mondain. Dead. His Apprentice Minax. Dead. Their child/demon/computer...thing; Exodus...defeated. While there's still dungeons and random monsters; there is no goal anymore. Nothing for the people to hope for; no more heroes for them to emulate.

Can there be Good without an external Evil to fight? The magical ruler of Britannia, Lord British, summons the Stranger of old who defeated those evils with a very new, very different task. Become the Champion of Virtue for people to have a goal to achieve. Master the 8 Virtues and find the Answer to this postmodern dilemma in The Codex of Wisdom, located in The Great Stygian Abyss. Fulfill the Quest of The Avatar.

A freeware version of the game with virtual Feelies is available on GOG.com.

Tropes used in Ultima IV include:
Retrieved from "https://allthetropes.org/w/index.php?title=Ultima_IV&oldid=1682348"
Categories:
Cookies help us deliver our services. By using our services, you agree to our use of cookies.