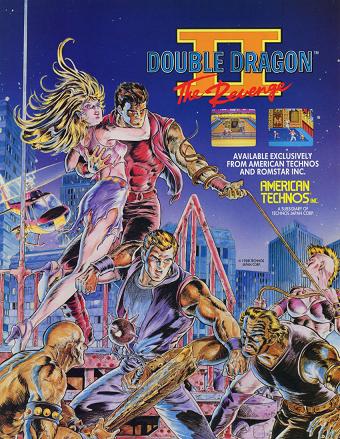 Beating the punks, saving the chicks. Just another typical day for Billy and Jimmy Lee.

Double Dragon is a series of side-scrolling Beat'Em Up's that helped popularize the genre back in the late 1980's and early 1990's.

The original 1987 arcade game, developed by the now-defunct Technos Japan Corp. and distributed by Taito, featured a rather simple and standard premise: twin martial artists Billy and Jimmy Lee must save their lady-friend Marian from the clutches of the Black Warriors, a ruthless gang that controls the city.

While not the first of its kind, as Double Dragon was originally intended to be a sequel to their previous game Renegade, the game improved upon its predecessor's formula by allowing up to two-players to play simultaneously and adding the ability to pick and use weapons against the enemies (both features would become standard in subsequent games in the genre). The 2-Players Mode also provided a twist in the end: if both players manage to make all the way through the end, then the two would be forced to fight each other to the death, with the survivor getting to claim Marian for himself.

Double Dragon was followed by two arcade sequels and numerous home versions for various platforms. The three NES versions (along with the first two Game Boy games and the SNES-exclusive installment) were actually developed by Technos themselves, while most of the other versions were licensed out and developed by other companies. The series died out after Technos went out of business in 1996 (long after the beat-'em-up boom ended), despite attempts to adapt it into a Fighting Game format. The series was revived when Million Corp., a company founded by former Technos staff members, bought the IP. While the series is nowhere near as prevalent as it was back in the day, it still gets an occasional new game once in a while.

In addition to the games, there was also an Animated Series and a live-action movie, as well as a comic where their dad was Stan Lee. Yes, that one.

Tropes used in Double Dragon include:
Retrieved from "https://allthetropes.org/w/index.php?title=Double_Dragon&oldid=1718978"
Categories: