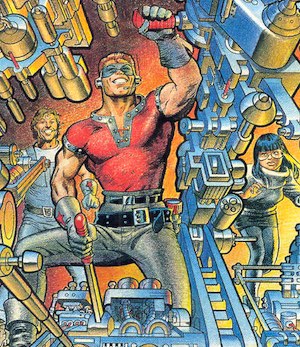 Steelgrip Starkey And The All-Purpose Power Tool was a six-issue Comic Book limited series created by Alan Weiss and published by Epic Comics in 1986. Positioning itself as a modern-day folk tale in the spirit of Paul Bunyan, John Henry, and Rosie the Riveter, it chronicles the adventures of Steelgrip Starkey as he embodies the virtues of honest labor.

Patrick "Steelgrip" Starkey and his friend Flynn "Flyin'" Ryan are construction workers recruited by a mysterious Mr. Pilgrim, inventor of the All-Purpose Power Tool. Using a new technology called "technalchemy", the APPT can perform any construction job, quickly synthesizing new components as needed. Joined by the tool's programmer, Sharri Barrnett, the three spend a year traveling the world as they perform various amazing feats, demonstrating that a good man with the right tool can perform miracles.

Tropes used in Steelgrip Starkey And The All-Purpose Power Tool include:
Retrieved from "https://allthetropes.org/w/index.php?title=Steelgrip_Starkey_And_The_All-Purpose_Power_Tool&oldid=1893483"
Categories:
Cookies help us deliver our services. By using our services, you agree to our use of cookies.