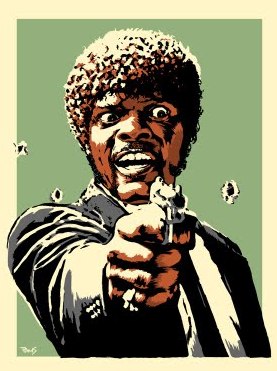 "What" ain't no country I ever heard of. They speak English in What?

In many series, there will be a character who is much larger and more intimidating than most everyone else, very strong, often quite quiet, and very often they will be black.

Authors will often claim this is not actually done in a racist way (not intentionally, anyway), as most anybody who is so much larger than the other characters will usually be equally scary (unless they're also outgoing or jolly). However, perhaps because of a lack of very large Asians who aren't sumo or very large white people who aren't professional wrestlers in a cameo role, they are often black. (This is the same reason that a Huge Schoolgirl usually isn't mean, either.) However, western media depictions cannot escape the legacy of the Big Black Buck (as featured in such influential films as D. W. Griffith's pro-Klan propaganda film Birth of a Nation), the savage (noble or not), or modern thug culture. Amongst other reasons, when much of the creating population and the consuming population is not of African descent, then the Black Guy becomes other, and as such, easier to position as an imposing, scary force.

The few black characters in Anime are usually some variation on this.

See also Scary Minority Suspect. Often Crosses over with Gentle Giant, Genius Bruiser, Proud Warrior Race Guy, and Token Minority, as noted both above and in the examples below. Compare Angry Black Man.

Note that the character doesn't necessarily have to be of African descent, just large, imposing, brown/dark-skinned, and have a tendency to make people wet themselves with a single glare.

Examples of Scary Black Man include:

Retrieved from "https://allthetropes.org/w/index.php?title=Scary_Black_Man&oldid=1952954"
Categories:
Cookies help us deliver our services. By using our services, you agree to our use of cookies.