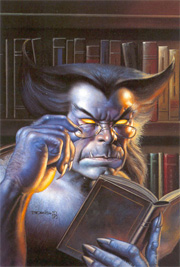 "Sir, I'm not going to ask again. Stop making a scene, or I'll remove you from this library."

A Big Guy who is also a geek or tech-head. Often coupled with Gentle Giant in a dual subversion (not to be confused with a Double Subversion).

Basically what happens when you put Brains and Brawn in one character.

The diametric opposite of Dumb Muscle. This guy has not only huge muscles and fists, but a very bright brain! There is, however, a difference between "especially smart" and "not a total moron"; keep that in mind when adding examples. Here's a tip: A character who is strong but displays frankly average intelligence is simply not an idiot. But if they constantly spout Techno Babble and are considered an expert in some scientific field, that's especially smart. Similarly, if they're especially smart, they must also be unusually strong to qualify. "Beats people up" or "very physically fit" don't exactly count.

The inversion is the Badass Bookworm. In general, a Genius Bruiser looks huge and powerfully muscled, then unexpectedly shows off an intellectual side, whereas a Badass Bookworm looks like a standard geek, but then displays a surprising amount of physical prowess. If Authority Equals Asskicking, you may well end up with an Emperor Scientist. A Genius Bruiser is almost always also a Cultured Badass, but the two aren't necessarily always found in the same individual.

In fantasy, a Genius Bruiser is often a Magic Knight or a Mighty Glacier. Also tends to be combined with Lightning Bruiser, as the speed is frequently tied into intelligence or very specific training. See also Minored in Asskicking. In a Five-Man Band specializing in brawn, is The Smart Guy. In a Five-Man Band specializing in brains, is The Big Guy.

Examples of Genius Bruiser include:

Retrieved from "https://allthetropes.org/w/index.php?title=Genius_Bruiser&oldid=1913425"
Categories:
Cookies help us deliver our services. By using our services, you agree to our use of cookies.