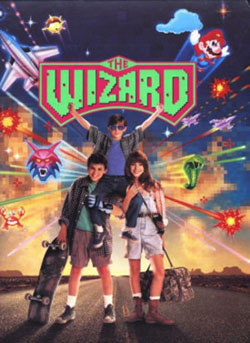 For the homonym TV Series, see The Wizard.

The Wizard is a 1989 film starring Fred Savage, Jenny Lewis, Christian Slater, and Beau Bridges. It is about Jimmy, a young boy who suffers from a serious mental disorder reminiscent of Hollywood Autism after a traumatic incident. After being put in an institution, Corey (Savage), one of his older brothers, breaks him out. They decide to run away to California Cawwwifffohneeeyaaaa together, as Jimmy is for some reason fixated on the place.

Along the way, they meet with some other kids that eerily seem to lack parental supervision. They also learn that Jimmy is a godlike entity around video games. Meanwhile, the concerned mother of the runaway kids hires a sleazy private detective named Putnam to track them down. This causes a rivalry between him and Sam, the father (Bridges) and Nick, the eldest brother (Slater) that are also trying to get to them.

But none of this is what the movie is well-known for. The film is a fairly blatant Merchandise-Driven affair, made to sell Nintendo products and the Universal Studios tour. In fact, much of the film's initial appeal was that it had a sneak peek of Super Mario Bros 3 (for North America; it had been available in Japan for more than a year).

The film maintains a cult following within the video game culture based on its Snark Bait potential. Analyzing the film is a senior thesis of its own, but some of the major issues include the following:

Still, it's a fairly popular Sunday afternoon TV recycle amongst younger kids who aren't familiar with Nintendo's heyday. Or who don't know any better. Given the utter glee that we still put into referencing/mocking it more than two decades later, it was worth every dime Nintendo put into it.

Tropes used in The Wizard (film) include:
Retrieved from "https://allthetropes.org/w/index.php?title=The_Wizard_(film)&oldid=1702631"
Categories:
Cookies help us deliver our services. By using our services, you agree to our use of cookies.