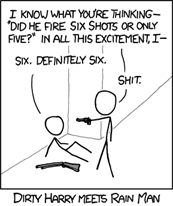 The Rainman has a Disability Superpower. Karmic law dictates that every mental birth defect has a compensating benefit. Like taking flaws on an RPG character, there is always an intelligence point payback, and usually a special skill, too. Some Rain Men are friendless creepy freaks, others are lovable weirdos. Rain Men are always equipped with supernatural skills.

These skills are usually mental and often geeky. At the low end are super keen observation, memory and calculation. At the high end are telekinesis and hacking into the world's computational substrate. In the namesake film, the skills are near-instantaneous observation and counting that makes Dustin Hoffman's character a nightmare for a decent casino.

If a kidnapping situation comes up, expect these skills to be used.

In Real Life, autism is a complex brain development disorder associated with interaction/communication problems and restricted repetitious behavior. Extreme cases can be disabling, but the negative medical view of autism is highly controversial in some quarters. Autism is seen by many autistics (including some people with Asperger syndrome, or "Aspies") as more akin to a different viewpoint and way of life. Savant skills are rare, although repetitious behavior does tend to result in autistics acquiring some unusual skills through practice. But none of that makes good television, does it?

Oh, and savant skills aren't always associated with autism to begin with. The person "Rain Man" was based on, a savant named Kim Peek, was not autistic.

See also Science-Related Memetic Disorder, for a truly exaggerated take on the subject; Crazy Awesome, for utter insanity as opposed to a simple mental disorder; Idiot Savant when the disability is just plain stupidity, and Neurodiversity Is Supernatural for if the character's "gift" is a superpower. Can overlap with High Functioning Autism.

If you are looking for the film called Rain Man, it is here.

Examples of The Rainman include:

Interviewer: What's your opinion on the board shorts?
Marzo: Well, they kind of ride up in the back, and I don't like some of the colors. (pause) Oh, was I supposed to say what I liked about them?