Everything About Fiction You Never Wanted to Know.
(Redirected from Useful Notes/Ireland)
Jump to navigation Jump to search

Ireland is a medium sized, rain-swept island on the western fringe of Europe, which looks a bit like a teddy bear (imagine it in the profile, looking away from Britain). It is also the name of the country that covers four fifths of that island, the rest being covered by Northern Ireland (part of the UK). For Hollywood clichés about Ireland, see Oireland. For more about Northern Ireland, see Stroke Country and The Troubles.

A note on the name. The official name of the country is simply Ireland in English, but "Republic of Ireland" is the official description (The Republic of Ireland Act, 1948). Both are acceptable, though using the latter in casual speech will probably get you odd looks in Dublin (not hostile, just odd). Éire (aer-rha) is technically legitimate but for various complicated reasons involving Stroke Country is not used casually.

Ireland (the country) is the second most Catholic country in Europe after Poland, though the influence of the Church has waned in recent years, especially in the wake of a sex abuse scandal and coverup, but it is still enough that Ireland got an agreement in the Lisbon Treaty that its ban on abortion would not be touched. It was also up until recently one of the poorest countries in Europe, classified as a third-world country, but this has been completely reversed over the past decade and now the country is one of richest states in the world. Irish economic success lead to the country being dubbed the Celtic Tiger - like the Tiger economies of Asia - and is mostly derived from a lot of financial investment through Ireland's EU membership. Ireland's reliance on foreign investment and large debts came back to haunt it during the international economic crisis, and it is currently on the decline again, Ireland being the first country in Europe to officially declare itself in recession, as well as being one of the PIGS economies (along with Greece, Portugal and Spain).

Speaking of recessions, Ireland was very heavily hit by the recession. An Bord Snip Nua deals in cutting Ireland's strained budgets and everyone seems to be protesting. Luckily, as the whole Dáil is on holiday, some of these cuts have yet to be made. As of now, most of the cuts have been made to children (especially those with special needs), the elderly, and those below the poverty line...

Don't speak ill of farmers though! If visiting Ireland, never mention the fact the farmers claim to be scraping the last two cents together, yet they can freely leave their farms and go up to Leinster House in 100 grand '08 tractors (and, yet, they are still getting grants!)

One of the fastest growing too - Ireland has one of the highest fertility rates in Europe and is in the middle of an immigration boom.

Ireland is also known for its agriculture, having more sheep than humans in its territory. The massive failure of the potato crop in the late 1840s led to about a million deaths and a further million emigrating.

The Irish are the smartest people in the world. Don't believe me? Just ask Mensa. [dead link] Ireland is also famous for its dead writers (most of whom left Ireland as fast as possible), its lack of snakes, its dancers, its poetry and love of drink. Plus the world's second highest percentage of redheads(10%), behind Scotland(13%). As such this has become a stereotype outside of Ireland (especially in the states), thus any Irish character is very likely to be sporting red hair, despite the reality that most Irish are brunettes and also more likely to be blonde too.

Politically, Ireland is best described as non-aligned. It's a member of the European Union, but not of NATO. It does, however, allow Shannon airport to be used for refuelling by US military flights (which caused controversy in the lead-up to the Iraq War) and Soviet aircraft refuelled there during the Cuban Missile Crisis. During World War Two, it was officially neutral, but helped the Allies out a bit and suffered rationing due to the German blockade. Dublin was bombed once on 31 May 1941 by a German aircraft, killing 34 people, for reasons that aren't clear to this day, with various arguments for navigation error, reprisal for Dublin sending rescue personnel to Belfast, a warning not to enter the war or a result of the British radio beam "bending". The Germans apologised and offered compensation. There were two other attacks by the Luftwaffe during the war.

Its military is relatively small, unlike many other neutral states, though it is still larger than a few similarly sized-states such as New Zealand (and in per-capita terms Ireland has a higher percentage of soldiers than Canada or Australia.) Since 1958 its main active function has been involvement in UN peacekeeping operations.

The current Irish Taoiseach [tee-shock] (think 'Prime Minister', but don't actually say it) as of the 9th of March is Enda Kenny of Fine Gael [fee-na gale], and his Tánaiste [tawn-ish-teh](Deputy Prime Minister) is Eamonn Gilmore of the Labour Party.

His predecessor was Brian 'Biffo' Cowen. 'Biffo' is a mildly pejorative but mostly affectionate nickname that stands for Big Ignorant Fecker From Offaly (the somewhat polite version). Prior to the recent election he announced his retirement from politics, and was the first Taoiseach in the history of the state not to stand for reelection. 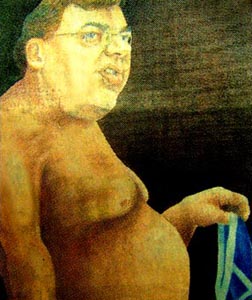 Brian Cowen. This picture, (along with a counterpart of the Taoiseach on the toilet) were hung in Royal Hibernian Academy (RHA) gallery and the National Gallery of Ireland.

Prior to that it was Bertie Ahern, but he stood down on 6 May 2008 for reasons involving alleged corruption (let's just say he was very good at guessing who won at the races). His daughter, Cecilia, wrote the original novel for P.S. I Love You, which has been made into a feature film. She's also the co-creator of Samantha Who.

There are a large number of accents audible in modern Ireland, for example: "real" Dublin, "D4" Dublin, midlands, Traveller, Cork, Kerry, Clare, Connacht ... and these are just the main ones. Researchers have found that there's a different accent for roughly every 5 miles you travel. That's basically a new accent for every single town on the island.

Fiction set in Ireland (unless it involves The Troubles) will either take place in Dublin or in a tiny village in some undefined part of the countryside. Virtually nothing takes place in other cities or towns. Exceptions are few enough to list: 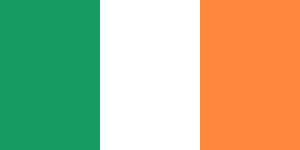 Gaelic green, Scots-Irish orange, and white for peace between them. Or at least a neutral buffer zone.
Retrieved from "https://allthetropes.org/w/index.php?title=Ireland&oldid=1637082"
Categories:
Cookies help us deliver our services. By using our services, you agree to our use of cookies.