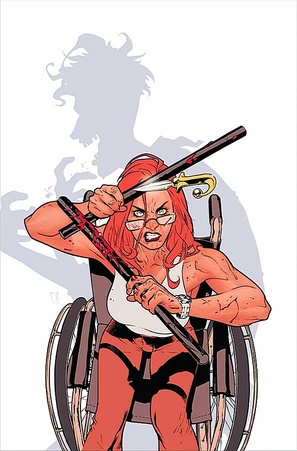 How can you possibly make an undeniably Badass character even more badass? Easy; make him lose an eye, or have her get paralyzed from the waist down, or give them some disease from which there is no cure. And... do NOT use the Reset Button. "What?!", you say. "My character must stay injured/handicapped?" Simply, yes.

In Real Life, we know how hard it is to accomplish Badass feats in perfect health and condition, so of course anybody that does it with a handicap instantly earns our respect. Imagine how much more awesome that shoot-out is going to be when the audience finds out The Hero...is blind. Imagine the buzz your character will get when they win the judo competition with just one good leg. If done right, a handicapped character even doing something mundane can become a Crowning Moment of Awesome.

It is important that your character's conquest of their physical challenge make sense; not properly explaining their ability to continue to function, let alone functioning on the badass level, will result in audience confusion, or worse, your character might become a kind of Sympathetic Sue.

For sake of story, a restrained dose of Applied Phlebotinum is allowed to explain or aid the character's ability to overcome the handicap. This technological or otherwise un-standard aid cannot completely cure or nullify the effects of the injury, that would kill the point of the character triumphing over the handicap. Thus, the Six Million Dollar Man wouldn't count. On the other hand, if the device that helps the character has drawbacks to using it that constantly reminds the character of their issue, well that's cool - e.g. a blind character gets a robotic eye that gives him X-Ray vision, but it won't work in broad daylight...

Some writers will go for extra points by showing how an injury actually unlocked the character's true potential by causing them to discover some heretofore unrealized skill or ability or learning a new one. A Training Montage might be in order to show how the character learned to overcome the handicap. If a person has powers because they are disabled, then that's Disability Superpower. The Deaf Composer may go through a similar process regarding their chosen craft.

One of the few tropes where you might see it more in Real Life than in any fiction; it's what happens when people don't accept Sorry, Billy, But You Just Don't Have Legs as an answer.

Of course, it annoys real-life disabled people often enough, too, when they are expected to follow this trope and be "inspirational" instead of just going about their lives, possibly (God forbid) wanting accommodations. Well, at least it isn't vomit-inducing pity.

Examples of Handicapped Badass include:

Retrieved from "https://allthetropes.org/w/index.php?title=Handicapped_Badass&oldid=1927449"
Categories:
Cookies help us deliver our services. By using our services, you agree to our use of cookies.