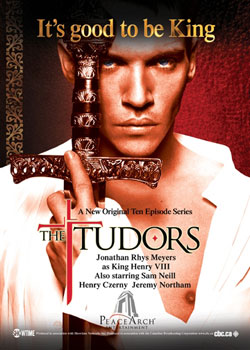 Showtime's Emmy-nominated retelling of the life of King Henry VIII, which devotes most of its time to the dissolution of his marriage to the older Catherine of Aragon and his deepening relationship with the saucy Anne Boleyn, who was to become his second wife. Gone from this series is the traditional vision of Henry as the bearded, bloated, jewel-encrusted, aging monarch who gleefully sent his wives to the chopping block. Instead, Jonathan Rhys Meyers' portrayal is that of a young, dynamic king determined to use his position to squeeze as much pleasure as he can out of life whilst balancing atop the ruthless world of Renaissance politics.

(He does get a beard as of the second season however.)

In the third season the story continues with Henry's third and fourth wife, and introduces the fifth. Season four covers wives five and six.

Despite this series' claim to tell the real story, this production is mostly a cut down version of history, playing fast and loose with the facts to tell a dramatic tale of intrigue, sex, disease, sex, tragedy, sex, death and sex. Despite the constant sex, the show is very good at showing a lot of the intrigue and events that went on between Henry and his aides, and the reformation is handled reasonably accurately, with a great emphasis on the rebellions and difficulties it made.

A Spiritual Successor to The Tudors called The Borgias based on the life of Rodrigo Borgia (aka Pope Alexander the Sixth) and his family began airing April 2011.

Tropes used in The Tudors include:
Retrieved from "https://allthetropes.org/w/index.php?title=The_Tudors&oldid=1742455"
Categories: