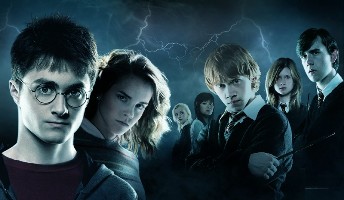 Harry and his crew.

Each Harry Potter book was lucky enough to become a film. The films star Daniel Radcliffe as Harry Potter, Rupert Grint as Ron Weasley and Emma Watson as Hermione Granger. The entire series spans eight films; the seventh book, Deathly Hallows, was split into two separate films in order to encompass as much of the final book's content as possible (a move which was met with decidedly mixed fan reaction).

The first two films, directed by Chris Columbus, place more emphasis on plot than characterization, with most scenes being identical to their counterparts in the books, and are generally regarded as solid but workmanlike. Columbus was succeeded by Alfonso Cuaron, who decided to reverse this and created what is likely the most controversial movie in the series. His Prisoner of Azkaban is either an artistic triumph or a lot of wangsting with a plot incomprehensible to anyone who hasn't read the book (or both). Mike Newell came next, following more-or-less in Cuarón's footsteps, but with a larger eye for spectacle and adventure. As Goblet of Fire was when J. K. Rowling started writing Door Stoppers, the movie version received attention mostly for how much stuff got left out. British TV director David Yates followed, helming Order of the Phoenix and all subsequent films, combining the Cuarón and Newell approaches in terms of style, while embracing the increasingly dark and grim tone of the later novels.

The Harry Potter fandom is rather sharply divided over whether the earlier films directed by Columbus, or the character-driven films which followed, are better; it basically comes down to how important certain subplots and plot points are, and whether the latter films are really exploring the characters or just indulging in angst. Critics are less divided, holding all of the later films in higher regard than the Columbus films. This being said, all of the films have been overall critical successes (the lowest mark on rottentomatoes.com being a 78, the lowest on Metacritic being a 63).

Retrieved from "https://allthetropes.org/w/index.php?title=Harry_Potter_(film)&oldid=1901649"
Categories:
Cookies help us deliver our services. By using our services, you agree to our use of cookies.