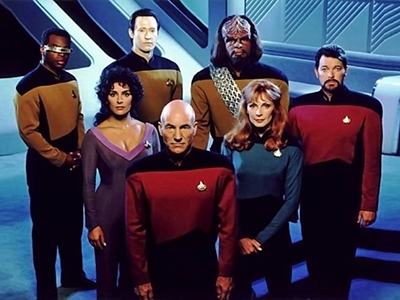 Star Trek: The Next Generation is a science fiction show created by Gene Roddenberry as part of the Star Trek franchise. Set in the 24th century, about eighty years after the original series, the program features a new crew, new perspectives on established cultures (a Klingon Empire as a semi-friendly ally against a Romulan Empire emerging from decades of isolation), new antagonists and a new Enterprise (Galaxy-class starship, registration NCC-1701-D).

After struggling for a few seasons trying to establish itself apart from the Original Series, it exploded into one of the most well respected television shows ever made, partially because of a change in direction (its creator had health problems starting around season two of the show's run leading to co-producer Rick Berman taking over most of the show's daily production and his promotion to executive producer during season three) and an increased willingness to experiment with the format and scope of the show, and science fiction as a whole. At 176 episodes in length, it was the longest running Star Trek series at the time, and won many awards for everything from visual effects to writing. Additionally, the series has proved wildly popular in Syndication, despite having broadcast its final episode in 1994, well over fifteen years ago. To date, in the U.S. alone, it has been broadcast on no less than five different cable / satellite networks: G4, Spike TV, Syfy, WGN America and most recently BBC America. Three of these networks, SyFy, WGN America & BBC America still regularly air episodes of the program, sometimes against each other in prime-time.

Although much of the show shared the premise of the Original Series, there were also well-placed Story Arcs: the omnipotent Trickster character of Q would show up to put Humanity on Trial (becoming a Book End storyline epitomizing the series) or to amuse himself at the expense of others; redefining the Klingons as being Proud Warrior Race Guys instead of the original "black hats"; various encounters with the hive-mind, cybernetic Borg (creating what is regarded as the pinnacle episode for the series and even the franchise, "The Best of Both Worlds"); several episodes with Wesley that developed his character; and defining moments for several of the main cast and the odd minor character, in addition to plenty of development for the Romulans, the Vulcans, the Cardassians and the Ferengi.

The series formed the basis of the seventh through tenth Star Trek films: Generations (1994), First Contact (1996), Insurrection (1998) and Nemesis (2002). The success led to an expansion of the franchise and is single-handedly responsible for the creation of Deep Space Nine, Voyager and Enterprise. Though fans will usually agree that the quality of the episodes varies wildly, the best make for compelling and thought-provoking viewing.

See also the Star Trek: The Next Generation Relaunch, a series of novels that follow the characters after the events of Star Trek: Nemesis, as well as setting the direction for the Star Trek Expanded Universe in terms of the original continuity (as opposed to the latest film, which is an Alternate Timeline).

Retrieved from "https://allthetropes.org/w/index.php?title=Star_Trek:_The_Next_Generation&oldid=1959866"
Categories:
Cookies help us deliver our services. By using our services, you agree to our use of cookies.