Everything About Fiction You Never Wanted to Know.
(Redirected from Useful Notes/Vatican City)
Jump to navigation Jump to search

I can see the Basilica from here! [1]

Vatican City is is the world's smallest country, a sovereign city-state located entirely within Rome. Created by the Lateran Accords of 1929, it had many previous, far more powerful incarnations, such as the Papal States.

The Pope, of which the Vatican is his primary residence, is the head of state of Vatican City, but is also the ruling body of The Holy See, the government of the Church whose influence extends far outside the city's walls.

The Holy See is not a member of the United Nations, but it has Permanent Observer status. Remarkably, this situation is the result of the Church being honorable: since the UN holds freedom and democracy as one of its highest values, and the Vatican is neither free nor democratic (as it is an absolute monarchy and all its inhabitants are either clergy oath-bound to obey the Pope or Swiss Guards oath-bound to obey the Pope), it declines to be a full member of the body out of honesty. This isn't to say that the Church is opposed to freedom or democracy – quite the opposite – but that the Vatican works best as it is, and nobody complains (it is the only state in the world where everyone who lives there has made an active and completely voluntary choice to do so). Vatican City also does not participate in the European Union, its income primarily consisting of contributions from believers around the world, as well as its tourist sector, although it uses the Euro as currency.

The smallest city/state devotes much of its money back outside, often leaving it slightly in the red. While it gained $355.5 million in revenue in 2008, it spent $356.8 million. Vatican City does house a vast and priceless collection of art collected over its multi-millennial existence, but chooses to keep the treasures for all to see; else, a private collector could buy and shut it away forever.

Please note that you must dress appropriately to enter[2].

Nowadays, the city mainly serves as the administrative capital of Catholicism and a major religious tourist destination in Rome.

Vatican City is the only nation in the world that can lock its own gates at night. It has its own phone company, radio, T.V. stations, money, and stamps. It even has its own army, the historic Swiss Guard. 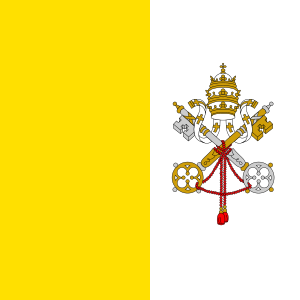 The flag of Vatican City
The Vatican In Fiction:

Retrieved from "https://allthetropes.org/w/index.php?title=Vatican_City&oldid=1665579"
Categories:
Cookies help us deliver our services. By using our services, you agree to our use of cookies.