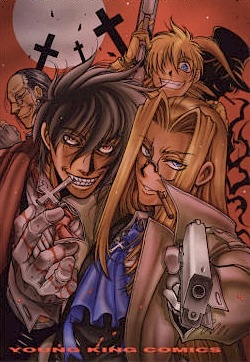 Not to be confused with Van Helsing

The Hellsing Organization's (officially, the Royal Order of Protestant Knights) job is to protect Great Britain from those who prey on the living -- and their chief operative is none other than the powerful vampire "Alucard". He doesn't have to use guns (with Depleted Phlebotinum Shells, Improbable Aiming Skills and near-Bottomless Magazines, no less) to kill other vampires and anyone else in his way, but he sure does like to.

Alucard faithfully serves the leader of Hellsing, Sir Integra Fairbrook Wingates Hellsing. Her devotion to the Anglican Church and the Queen prompts her to swiftly erase any threats towards them from existence and she sees no problem with employing the undead to destroy the undead.

The same cannot be said of Hellsing's rival, the fanatic Section XIII, Iscariot, of the Catholic Church. They consider Hellsing little better than the monsters they hunt, despise the Anglicans of England, and their champion, the paladin Father Alexander Anderson, is just as bloodthirsty and as apparently un-killable as Alucard.

Enter Seras Victoria, the sole "surviving" member of a police squad killed by a vampire. Alucard offered her the choice of dying human or becoming a vampire. Seras chooses to become a vampire and, by consequence, work for the Hellsing organization alongside Alucard. Although she mostly acts as comic relief (among other duties), her weight as a character greatly increases in the second half of the story. Meanwhile, Hellsing uncovers a plot of apocalyptic proportions, hatched by the mysterious “Millennium”.

Hellsing exists as the original manga, an OVA series, and a television series. There is also a prequel, Hellsing: The Dawn which focus on Alucard and a young Walter during World War 2. Did we mention Alucard is a girl in this one?

This page deals with the manga and its OVA. For the TV series, see Hellsing.

Tropes used in Hellsing include:

Tropes that appear only in the OVA:

Retrieved from "https://allthetropes.org/w/index.php?title=Hellsing&oldid=1955164"
Categories:
Cookies help us deliver our services. By using our services, you agree to our use of cookies.