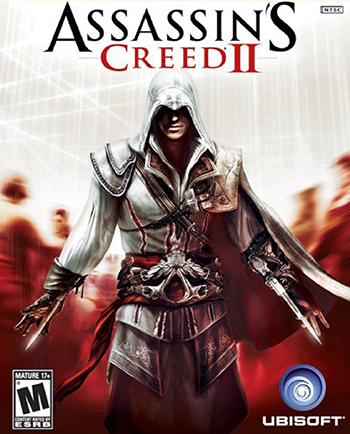 Contrasting to the Crusade time period of the first game, this one jumps us forward a few hundred years and a few hundred miles to Renaissance Italy, while in the real world, the game picks up right where the first left off: Desmond and Lucy escape Abstergo's facility at the beginning of the game and flee to an Assassin safe house, where two other Assassins put him in a new and improved Animus, hoping he'll pick up some of Ezio's skills and find more Pieces of Eden.

The focus this time is on another one of Desmond's ancestors, Ezio Auditore da Firenze. Ezio is like most other young guys of his age and class: Rich Idiot With No Day Job, carefree, spending most of his time wooing girls (and then some) and jumping around the rooftops of his native Florence. Life takes a brutal turn for the teenager when most of his family is arrested in a political plot that leaves his father and two brothers dead... it turns out his father was an Assassin, and he has passed that mantle (along with some shiny equipment) to Ezio. Ezio, seeking revenge, flees with his sister and mother to his uncle's villa and begins to track down those responsible for the death of his family, following clues that lead from Florence to Tuscany, Forlì, Venice and even Rome.

Both Ezio and Desmond follow the plot all across Italy as hidden truths become uncovered and ancient conspiracies become unraveled. The way things appear is not the way things are, as secret messages from Desmond's predecessor Subject 16 reveal, and the men in both time periods find themselves wrapped within something that is much bigger than just the Templars versus the Assassins. As Ezio hunts down his family's killers in the Templar ranks, he gets closer and closer to discovering the truth: a truth that reveals the very core of who we are and where we came from to be one big lie. Like the first game, it ends on a very clear cliffhanger.

On the actual non-plot side, the game has been widely praised by reviewers and players alike for correcting many of the issues players complained about in the first game, with a wider variety of missions, smarter (but also easier to escape) guards, a more robust combat system, and a streamlined control system that allows for more free-running options. Two episodes of DLC were released to fill in missing Sequences 12 and 13 (Battle of Forlì and Bonfire of the Vanities) offering a more complete experience to the game. However, unlike the first game there is no ability to replay story memories on the same playthrough. You can redo the "secret messages" (the Glyph puzzles) in "The Truth" Menu by clicking the red puzzles.

As far as more games go, Assassin's Creed: Brotherhood is the direct successor to both Desmond and Ezio's stories, taking place in Rome. A third game Assassin's Creed: Revelations was released late 2011, taking place in Constantinople, mainly following Ezio and Altair, while also filling in some of Desmond's backstory. Revelations neatly ties off Altair's and Ezio's story lines, leaving a third game free to pick up with a new historical character, while Desmond travels to upstate New York.

Additionally, Ezio crossed over to another series, as a Guest Fighter in Soulcalibur V.

Tropes used in Assassin's Creed II include:
Retrieved from "https://allthetropes.org/w/index.php?title=Assassin%27s_Creed_II&oldid=1912279"
Categories:
Cookies help us deliver our services. By using our services, you agree to our use of cookies.